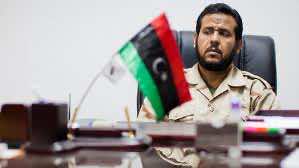 A Libyan commander who fought Moamer Kadhafi’s forces is taking legal action against Britain, alleging it was complicit in his ill-treatment and illegal rendition to Libya in 2004, his lawyers said Monday.

Abdelhakim Belhaj, who became head of the military council in Tripoli after Kadhafi’s fall this year, has instructed the law firm of Leigh Day and Co to sue the British government over the treatment he and his then-pregnant wife received, the lawyers said in a statement.

Officials in London confirmed they had received a letter warning of legal action and said an inquiry was under way into all allegations about British ill-treatment of detainees overseas following the September 11, 2001 attacks.

Belhaj’s lawyers say that in 2004, he was living in Beijing with his wife Fatima Bouchar after leading a low-level insurgency against Kadhafi’s regime in the 1990s as leader of the Libyan Islamic Fighting Group. Fearing they were under surveillance, the couple decided to seek asylum in

Britain. But on leaving China they were held and deported to Malaysia, from where they had previously travelled, the lawyers said.

They were then held in Kuala Lumpur for several weeks before being flown to
Thailand where they claim they were taken to a secret US prison and subjected to “barbaric treatment”.

Citing documents found in Libya after the fall of Kadhafi’s regime, Belhaj’s lawyers claim Britain alerted Tripoli to the couple’s presence in Malaysia, and helped their subsequent return to Libya on a secret US flight.

They say Belhaj then spent six years in some of Libya’s most brutal jails, during which time he was interrogated by British officials among others, while Bouchar was jailed for three months, being released just in time to give birth.

The lawyers cite a letter reportedly written by Mark Allen, then counter-terrorism director of British spy agency MI6, where he congratulates the Libyans on the arrival of Belhaj, who he names as Abu Abd Allah Sadiq.

He adds: “The intelligence on Abu Abd Allah was British. I know I did not pay for the air cargo. But I feel I have the right to deal with you direct on this and am very grateful for the help you are giving us.”

Britain’s Foreign Office said: “The government stands firmly against torture and cruel, inhuman and degrading treatment or punishment. We do not condone it, nor do we ask others to do it on our behalf.”

It noted that an inquiry was under way into allegations of British complicity in the ill-treatment or rendition of detainees held overseas by third parties after 9/11, which included allegations concerning Libya.