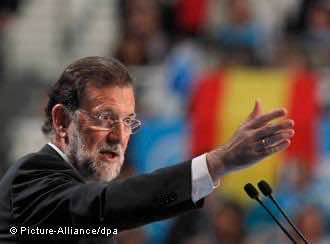 In his first speech to parliament, incoming Spanish Prime Minister Mariano Rajoy has vowed to implement comprehensive austerity measures to pull Spain’s economy back from the brink.

Spain’s prime minister-designate says that his conservative government will do everything in its power to return the country to financial health.

In a speech to parliament on Monday, Mariano Rajoy said that his government would stimulate economic growth while at the same time bringing down the country’s deficit.

“We are confronting enormous difficulties and must make very demanding efforts,” he told parliament, adding that “the panorama could not be more somber.”

The 56-year-old leader of the conservative People’s Party said he planned to cut the deficit by 16.5 billion euros ($21.6 billion), in an effort to meet Spain’s deficit goal of 4.4 percent of GDP in 2012. The deficit for this year is estimated at 7.5 percent, well above a target set by the government of the outgoing Socialist prime minister, Jose Luis Rodriguez Zapatero.

Spain’s public sector is set to face swingeing cuts to meet the budget deficit target, with every area except pensions under review. The government plans to get rid of overlapping services and enforce a hiring freeze across the public sector, with the exception of security services.

More detailed spending cuts are to be announced on December 30. Rajoy will officially take over as prime minister on Wednesday, when he will also name his cabinet.