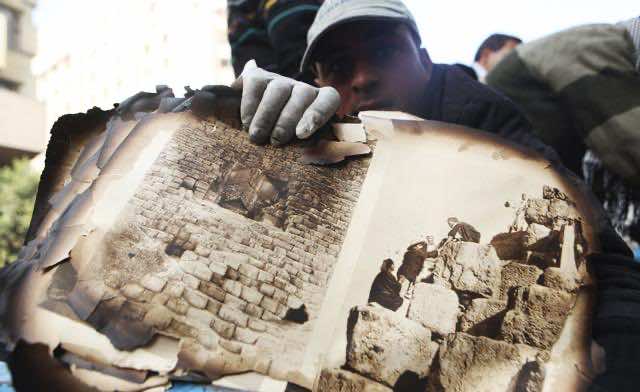 The fire that broke out in a Cairo library that houses thousands of rare documents raised concerns over the government’s and the army’s ability to protect historic sites at times of upheaval and drove several experts to warn of a possible intervention by foreign entities to preserve the heritage at risk.

Legal and archeological experts described failure to contain the fire that devoured large parts of the Scientific Complex in downtown Cairo and to rescue the priceless maps, manuscripts, and books kept inside as a disaster and warned that the possibility of similar acts of sabotage would make foreign intervention very likely.

Haggag Ibrahim, deputy chairman of the Association for the Preservation of Heritage and member of the Higher Commission for Museums, labeled those involved in setting the Scientific Complex on fire “the new Tatars” who want to erase all aspects of culture in the country.

“Those are the grandchildren of the Tatars who burned the library of Baghdad when they invaded the Muslim world,” he told Al Arabiya.

According to Ibrahim, UNESCO is now capable of placing historic sites in Egypt under international protection since Egyptians proved unable to do so themselves.

Among the documents that were burned, Ibrahim said, were maps that delineate Egypt’s borders; the maps played an important role in liberating the city of Taba in the Sinai Peninsula from Israeli occupation.

“There were also maps that date back to 1800 and a book written by French scientists during the French Campaign on Egypt, as well as maps of other countries,” he said.

Egypt, Ibrahim warned, could be expelled from any international cultural forum now that this damage to priceless documents has taken place.

“The UNESCO doesn’t have the right to impose international protection on a sovereign country because one historic establishment was subjected to an act of sabotage,” he said.

Amin explained that international protection on cultural heritage is imposed only if the country in which the sites are located is in a state of war or engaged in other types of armed conflict.

“As for the maps, there are copies of them in other places.”

A professor of archeology, Mamdouh al-Masry, held the Supreme Council for the Armed Forces (SCAF) accountable for failing to contain the fire and arrest the culprits.

“How can the SCAF allow such farce to continue until the library is consumed by the flames? How come they did not arrest the saboteurs right away?” Masry said.

Masry stressed that the right to protest is preserved for all citizens provided that no sabotage is involved and that work progress is not interrupted. He also objected to the way the sit-in was dealt with.

“If protestors insisted on continuing their sit-in, there were several other ways to resolve the crisis other than resorting to violence.”

The fact that the fire targeted the Scientific Complex and maps of Egypt’s borders in particular raises a lot of questions about a possible conspiracy, according to Masry.

“Was setting the complex on fire intentional in order to eliminate evidence of the borders between Egypt and Israel? Is Israel up to something especially after the Islamist victory in parliamentary election?” he said.

Egyptian archeology professor Ayman Hassan al-Dahshan agreed that a conspiracy is involved in the library fire.

“Why did the military make sure they take photos of the fire minute by minute but did not make an effort to rescue the building and arrest the saboteurs?”

Dahshan argued that the military council is either an accomplice in the act for some unknown reason or has lost control and is unable to control acts of sabotage and to distinguish between protestors and thugs.

“In all cases, what happened to a library that houses the heritage of the most vital country in the Middle East is definitely meant to undermine the state.”

Egyptian-American scientist and Nobel laureate Ahmed Zoweil called upon the “real revolutionaries” to withdraw from Tahrir Square and other surrounding areas in order to allow for a differentiation between protestors and thugs.

“Those thugs work for internal and external forces that want to destroy Egypt,” he said in a live statement on the Egyptian independent satellite channel CBC.

“In all cases, I call upon both the police and the army to stop using violence immediately,” he concluded.