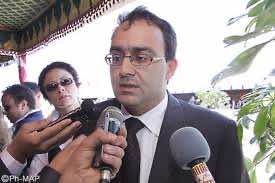 New Speaker of the House of Representatives, Karim Ghellab, pledged on Monday to put the Moroccan citizens’ concerns and expectations at the centre of the Lower House’s action.

Istaiqlal Party’s Ghellab, speaking following his election at the first ballot, said that the Lower House should be an area of dialogue and fruitful and democratic debate in order to bring appropriate solutions to the problems in different fields.

He also voiced determination to claim the opposition’s rights so that it fully assumes its constitutional role, encourage contribution of women and youth MPs and opened up the legislature to associations and universities, which will further promote the democratic culture in the society.

Ghelleb obtained 222 votes against 82 for his rival Mohamed Abou, of the National Rally of the Independents (RNI), while 16 ballot papers were annulled.

He tendered his resignation as minister to the outgoing Prime Minister Abbas El Fassi.

During the polls of November 25, the Istiqlal party won 60 seats in the 359-seat Parliament, coming after the winning Justice and Development Party (PJD), which secured 107 seats.

Abdelilah Benkirane, PJD Secretary General, is designated to lead a government coalition, which includes along with his party the Istiqlal Party, the Popular Movement party (MP) and the Progress and Socialism Party (PPS).

With 117-seat coalition, Benkirane secured a “comfortable majority” to form the first elected government after the adoption of the country’s new constitution last July.