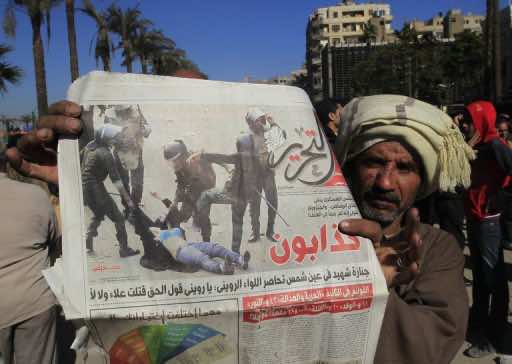 An impassioned Hillary Clinton on Monday accused post-revolution Egypt of failing its women as she denounced the stripping and beating of a female protester as “shocking” and a “disgrace.”

In unusually strong language, the US secretary of state accused Egypt’s new leaders of mistreatment of women both on the street and in politics since the street revolt nearly a year ago that overthrew leader Hosni Mubarak.

“This systematic degradation of Egyptian women dishonors the revolution, disgraces the state and its uniform and is not worthy of a great people,” Clinton said in a speech at Georgetown University.

Other pictures circulating on social media networks that have enraged protesters include one of a military policeman looming over a sobbing elderly woman with his truncheon.

“Recent events in Egypt have been particularly shocking. Women are being beaten and humiliated in the same streets where they risked their lives for the revolution only a few short months ago,” Clinton said.

She denounced a “deeply troubling pattern” of military authorities and the major political parties alike keeping Egyptian women out of decision-making.

“At the same time, they have been specifically targeted both by security forces and extremists,” the top US diplomat said.

“Women protesters have been rounded up and subjected to horrific abuse. Journalists have been sexually assaulted and now women are being attacked, stripped and beaten in the streets.”

Responding later to a question by a student, Clinton said that Egyptians and not Americans should be the first ones disturbed by poor treatment of women.

“Beating women is not cultural, it’s criminal and it needs to be addressed and treated as such,” she said to applause.

Clinton, who narrowly lost her bid to be the first female US president, has frequently been outspoken about women’s rights during her tenure as the country’s top diplomat.

She addressed events in Egypt as part of a broader speech in which she argued that peacemaking efforts around the world would benefit from greater involvement by women.

President Barack Obama on Monday signed an executive order setting up a “National Action Plan on Women, Peace and Security,” which Clinton said would advance women’s role in peacemaking throughout US government agencies.

“Women are bellwethers of society and, in fact, sometimes they do play the role of canary in the coal mine. They know when communities are fraying and when citizens fear for their safety,” Clinton said.

As part of the new effort, the United States will monitor violence and discrimination against women to help detect future conflicts, Clinton said.

The United States will also step up assistance to grassroots groups working to stop violence against women and increase their economic empowerment.

The first round of grants will cover support for a trauma center for rape survivors in Sudan, economic and legal assistance for women in Central African Republic and better collection of medical evidence to prosecute rampant rape in the Democratic Republic of Congo.

“But political leaders too often overlook women’s knowledge and experience until it’s too late to stop violence from spiraling out of control,” she said.