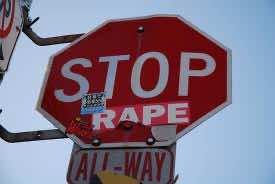 Rape is one the most abominable crimes committed against women. The perpetration of rape is not only a physical assault but mainly a lethal attack on human dignity. Its repercussions on women’s psyche are grave and the damage caused to the rape victim is almost irremediable. Women normally have a dialectical relationship with their body image. Health Canada defines body image as the picture one has of his or her body, what it looks in the mirror and how it looks to others.

In fact, women realize at a young age that their body shape and the esteem of others are intertwined. Confused between media driven ideals and their own perception of their bodies, women are more likely to develop a distorted body image. A physical assault such as rape can have a devastating impact on women’s psychological structure. Victims of sexual abuse often feel extreme discomfort towards their bodies and a bitter sense of guilt.

Rape is a worldwide issue that threatens women’s physical and mental health throughout the world. Global estimates suggest that 30% of women are subjected to various kinds of violence including rape. According to the American Center of Disease Control and prevention, 20% of American women have been rape victims at one point in their lives.

The CDC report reveals that 80% of sexual assaults are committed by relatives. In 2O11, the number of rape victims reached 1.3 million, according to federal authorities. Alarmed by these figures, Katheleen Sbelius the secretary of Health and Human Services considered that the CDC study shows the seriousness of the problem of rape.

Imane Fahdi, a Moroccan psychology graduate, has conducted an empirical research about the relationship between rape and body image. She interviewed two rape victims and tried to appraise the impact of rape on their self esteem. For ethical reasons the name of the rape victims will not be revealed.

“A” is a 26 years old woman who was eager to disclose her suffering to the therapists in Ibn Sina hospital in Rabat. Her ordeal began the day she went to a café with a close friend. Some hours later, she found herself detained by a psychopath who raped her repeatedly before she could escape.

In a patriarchal society such as Morocco, where “the virgin” is the most treasured commodity, “A” felt irrevocably dishonored and could not turn to her family for comfort. She decided then to live on her own. Her unwanted pregnancy has further heightened her predicament. With few qualifications, she found herself in a downward spiral of drugs and prostitution.   “A” developed a negative relationship towards her body that she attempted to mutilate several times, especially when she recalled the rape scene.

Imane, asserted that the encounter with “F,” a 17 year old, an unfortunate victim of gang rape, was heartbreaking. The young girl was taken in/housed by the Center for Girls Care in Casablanca in the aftermath of her aggression. She was waiting for public transportation in her small village, when she was abducted by young men who forced her to get into their car.

The ravishers alternately raped her while she was begging them to have mercy on her. The therapist noticed that “F” displayed some behavioral disorders. For instance, she believed that everyone was mocking her, even her female roommate in the care center. On the other hand, she completely neglected her appearance as she grew oblivious of her own hygiene.

Wafaa, a social worker in the center has been following closely “F”’s psychological distress. She noticed that “F” was increasingly introverted and had rather a serene temper. Wafaa adds that the gang rape was a traumatic experience for “F” that has resulted in urination and sleep disorders. The therapist concludes that “F” has been through a psychological trauma triggered by a sexual assault. Consequently, her body image was severely deformed which has undermined her self esteem. Hence, the self inflicted seclusion.

Rape is considered by many as a form of sexual coercion but its underlying motivations are not merely biological. It is a hate driven crime, motivated by the vicious desire to humiliate and destroy the victim. Indeed, rape can shatter the victims’ genuine hope for a normal life.

Loubna FLAH is a Moroccan national. She earned a master degree in Biochemistry from the Mohammedia faculty of science and technologies. She obtained also a bachelor degree in English studies from Ain Chok University after writing a dissertation about the aspects of sexism in Moroccan Arabic.  She graduated from the Ecole Normale Superieure in Rabat as a high school teacher of English. She conducted an empirical research on critical thinking in EFL teaching in Moroccan high schools.  She is also the founder of the cultural committee at the ENS which is in charge of promoting and organizing cultural events.