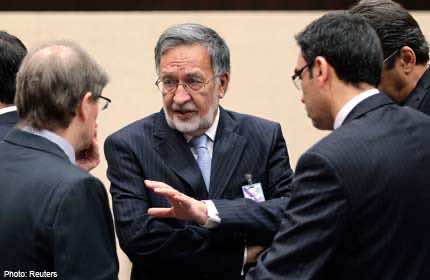 Russia on Monday stepped up demands for NATO to account for civilian deaths from the air strike campaign which led to the downfall of Libyan strongman Moamer Kadhafi.

The campaign by Britain, France, the United States and their allies has severely divided the UN Security Council with NATO’s opponents blaming the strikes for the failure to condemn Syria’s clampdown on demonstrators.

Russia’s UN envoy Vitaly Churkin said he would take up with the UN Security Council this week estimates given The New York Times that the NATO air attacks this year had killed between 40 and more than 70 people in Libya.

Churkin also criticized UN leader Ban Ki-moon for supporting the strikes by the United States, Britain, France and its allies against Kadhafi targets after the strongman’s clampdown on opposition protests.

“We hope that NATO is going to revisit this entire problem, is going to investigate this matter,” Churkin told reporters.

“Unfortunately NATO adopted a pure propaganda stand claiming zero civilian casualties in Libya which was completely implausible first of all and secondly not true,” said the envoy.

“To avoid any misunderstanding this issue has to be faced squarely and seriously and needs to be investigated,” he added.

NATO leaders have said that while they regret any civilian deaths, they have no figures for the number of casualties for the campaign, which started after the UN Security Council passed resolutions in February and March allowing sanctions against Kadhafi.

Russia, China, Brazil, India and South Africa abstained in the vote allowing military action to protect civilians and have since frequently complained that NATO overstepped the resolutions to deliberately bring down Kadhafi.

The NATO allies have insisted they remained within the UN resolutions and were backed last week by UN Secretary General Ban Ki-moon.

Churkin said that it was “cruel and cynical” for the victims of the Libya strikes to be told that nothing had happened.

Last week, Ban said that NATO had acted “strictly” within UN resolution 1973 passed in March on military operations. He said he had stressed to NATO that there should be no civilian casualties and added: “I believe that this is what we have seen and there should be no misunderstanding on that.”

Churkin replied that the UN leadership “should not throw its weight around when issues of such importance are being debated within the Security Council.

Only the Security Council can be the judge of whether its resolutions have been faithfully implemented.”

The Russian envoy said he would raise the case on Thursday when Libya is
discussed by the Security Council and in further meetings.

Russia and China have partly blamed the Libya campaign for their refusal to allow Security Council action against Syria.