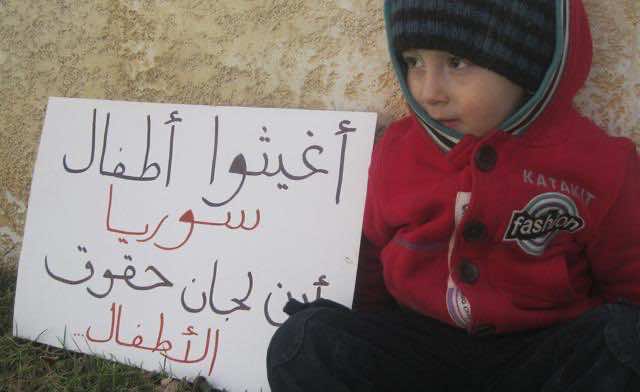 The United States Monday reacted skeptically to Syria’s agreement to allow an Arab state to monitor Syrian compliance with an Arab League peace agreement designed to stop the violence in the country as Syrian opposition leaders dismissed the agreement as a new stalling tactic by President Bashar al-Assad and called for foreign military intervention.

Human rights activists, meanwhile, said as many as 121 people were killed on Monday in Syria as the U.N. General Assembly overwhelmingly condemned human rights in Syria where an estimated 5,000 people have died during a nine-month confrontation between the security forces and protesters opposed to the Assad family’s 41-year rule.

U.S. State Department spokeswoman Victoria Nuland said the United States wanted to see Syria carry through with the Arab League peace plan, saying Syrian officials had failed to keep agreements too often in the past to be taken at their word.
“We have seen too many broken promises from the Syrian regime,” she told reporters, according to Reuters. “So we are really less interested in a signed piece of paper than we are in actions to implement commitments made.”

“So it’s on that basis that we will judge the seriousness of the Syrian regime with regard to its apparent acquiescence to the Arab League’s proposal,” she said.

The government of Syrian President Bashar al-Assad agreed to the peace plan after facing sanctions and threats from the Arab League that it would take the issue to the United Nations Security Council.

The Syrian opposition dismissed the agreement as a new stalling tactic and called instead for military intervention to stop Syria’s crackdown on a 9-month-old anti-government protest movement.

Burhan Ghalioun, the leader of Syria’s main opposition group, the Syrian National Council, accused the Assad regime of lying and said the signing was “worthless” in light of the brutal crackdown daily, according to The Associated Press.

“The Syrian regime is maneuvering and wants to buy time,” he said in Tunisia, where the group has been holding a three-day conference aimed at unifying Syria’s fragmented opposition.

Ghalioun called for Arab military intervention to protect civilians and the creation of humanitarian corridors to deliver aid.

A Syrian-based anti-regime activist who identifies himself as Abu Hamza said the Syrian regime “has signed something it cannot implement.” He said if the government withdraws the military from the streets, mass demonstrations will take pace throughout the country.

“This will automatically lead to the downfall of the regime,” Abu Hamza said, declining to give his real name for fear of retribution.

Damascus said it had been urged to sign by Russia, its long-time ally and arms supplier, which has shown signs of losing patience. Moscow praised the deal as a chance for stability.

“We believe that the document signed in Cairo gives an opportunity to … provide safety for the Syrian people and stabilize the situation,” the Russian Foreign ministry said in a statement, according to Interfax news agency.

A resolution, passed with 133 countries in favor, 11 against and 43 abstentions “strongly condemns the continued grave and systematic human rights violations” by Syria, highlighting “arbitrary executions” and “persecution” of protesters and human rights defenders.

Syria’s U.N. ambassador said the resolution was part of a “devilish” plot against his country.

Russia and China abstained in the vote, which was passed as the U.N. Security Council started negotiations on a Russian-proposed resolution which would condemn violence by both sides in the conflict.

Western nations say the Russian draft is unbalanced because it compares the opposition violence to that by the government.

The General Assembly motion against Syria was passed by 11 more countries than the number which backed it in the assembly’s human rights committee on Nov. 22. Diplomats said this reflected the growing isolation of Syria.

He said the vote was intended “to send a strong signal by the international community to the Syrian authorities to immediately stop the violence and the systematic human rights violations against their own population.”

Iran and a group of radical Latin American nations, including Cuba, Venezuela and Bolivia, sided with Syria.

On the ground, as many as 121 people have been killed in Syria, rights activists said.

The Syrian Observatory for Human Rights said on Monday that more than 60 army deserters had been shot dead by machinegun fire as they tried to flee their base, citing accounts from wounded survivors. It also counted 60 civilians shot dead across Syria in the crackdown on protests.

The British-based observatory said three soldiers had died in fighting with armed rebels backing the opposition in Idlib province. The state news agency SANA said security forces there had killed at least one “terrorist” and wounded several.

The Arab League, which has imposed economic sanctions on Syria, had threatened to take the issue to the United Nations Security Council.

However, the executive head of the League said after the signing of a protocol on foreign observers that there was no immediate plan to lift sanctions that were imposed when Damascus at first refused outside monitors. Nabil al-Araby said observers would now determine whether Syria’s government was complying.

Insisting that Syria had not been forced into submission, Foreign Minister Walid al-Muallem said he had won several unspecified modifications before signing the deal, which initially allows in observers for one month.

“The Arab League delegation’s reports will be sent to me and the League’s secretary-general at the same time, and he and I will discuss them before any other action is taken,” Muallem said. “That is the text after Syria’s modifications.”

The remarks were broadcast on Syrian television. Most foreign media have been barred from Syria this year.

Violence has escalated in recent weeks in Syria with more frequent armed clashes between military defectors and security forces. The increasing militarization of the conflict has raised fears the country is sliding toward civil war.