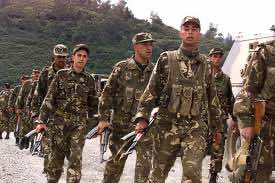 “Algerian troops are currently stationed in northern Mali to assist the Malian army in the fight against terrorism,” a high-ranking military official said.

He would not divulge the number of Algerian troops now based in Mali nor the expected length of their stay.

“We know there is a team of instructors of at least 15, including officers,” a diplomatic source said, also on condition of anonymity.

Customs officials told AFP they saw a convoy carrying Algerian military between the northern towns of Kidal and Tessalit, near the Algerian border.

Al-Qaeda-linked groups have been active in Algeria, Mali, Niger and Mauritania for a decade but their activity has picked up since the fall of Moamer Kadhafi scattered the slain Libyan strongman’s arsenal across the region.

Al-Qaeda in the Islamic Maghreb (AQIM) and a splinter group that surfaced earlier this month — the Movement for Oneness and Jihad in West Africa — currently hold 12 European hostages.

In April 2010, the four countries formed a Committee of Joint Chiefs (CEMOC), based in the Algerian town of Tamanrasset, to coordinate their military efforts against AQIM.

CEMOC army chiefs meet every six months but had never yet organised joint patrols, with the smaller countries criticising the group’s powerhouse Algeria for failing to send more help.

Algiers for its part has complained that Maliwas the committee’s weak link, blaming Bamako for allowing AQIM to set up bases on its territory and releasing jailed militants in exchange for hostages.

A source close to the Malian defence ministry said a meeting between Malian and Algerian top brass was due to take place in Bamako on Wednesday.

World security analysts have voiced concern that while “Al Qaeda central” has been weakened in 2011, the group’s franchise in Africa could become a new terror hub posing a threat far beyond the four countries currently most affected.