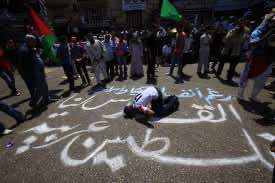 Representatives of all the Palestinian factions began meeting in Cairo on Tuesday to discuss ways of implementing a stalled reconciliation deal, delegates said.

But officials played down expectations of a breakthrough, with Fatah delegation head Azzam al-Ahmed telling AFP he did not expect any agreement on the key issues of security and an interim government “before the end of January.”

“This meeting has one aim: to put in place mechanisms for ending the Palestinian division,” he said.

On the agenda were questions relating to a range of key issues, including the formation of a caretaker cabinet, security, social reconciliation, parliamentary and presidential elections and reformation of the Palestine Liberation Organisation (PLO), he said.

Izzat al-Rishq, a senior official from the Hamas delegation, said Tuesday’s talks demonstrated that all the Palestinian factions were committed to forming a united front.

“Through this meeting, all the Palestinian national movements are reaffirming their determination that 2011 will not finish without putting an end to the division,” he told AFP.

Officials from the rival Fatah and Hamas movements have been holding talks in Cairo since Sunday to discuss ways of implementing a landmark reconciliation deal which was signed in May but which has never got off the ground.

On Thursday, Palestinian president and Fatah chief Mahmud Abbas will preside over a meeting of the PLO Commission, a body set up in 2005 to examine ways of reforming the organisation, Ahmed said.

All the faction leaders belong to the PLO Commission, and Thursday’s meeting was to be attended by Hamas leader Khaled Meshaal and Islamic Jihad head Ramadan Shallah.

Neither faction currently belongs to the PLO, although discussions are under way to restructure the body in order to let them join.

Both Meshaal and Abbas were expected in Cairoon Wednesday, officials said.

The deal signed between the two former rivals in May called for the establishment of a caretaker cabinet which would prepare for legislative and presidential elections within a year, but it was never implemented.