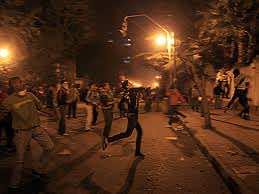 Most of the 13 people killed in recent days of anti-military clashes in Cairo died of gunshot wounds, and one died in detention after suffering head trauma, Egypt’s chief forensic doctor said Tuesday.

Georgi nine of the 13 people killed since the start of protests on Friday “were wounded by gunshots,” the official MENA news agency reported.

One of the dead “breathed his last breath in detention in the south Cairo court, before he was presented to the prosecution. The cause of death was traumatic injury to the head that causes internal bleeding,” he said.

Georgi said only 10 of the dead had been autopsied so far.  Earlier the health ministry had put the death toll since Friday at 12.

The military, which took power after an uprising ousted president Hosni Mubarak in February, faces outrage over its heavy-handed crackdown on protesters, who want it to immediately transfer power to civilians.

On Friday, soldiers who stormed the square after clashes around the nearby cabinet building were videotaped shooting pistols at protesters and beating a helpless veiled women on the ground, tearing off her shirt.

US Secretary of State Hillary Clinton on Monday denounced Egypt’s treatment of women as “shocking” and a “disgrace” after footage of the beating circulated on the Internet.

In unusually strong remarks, Clinton accused Egyptian authorities of failing the country’s women since the revolution that overthrew Mubarak, both by excluding them from power and humiliating them in the streets.

“This systematic degradation of Egyptian women dishonors the revolution, disgraces the state and its uniform and is not worthy of a great people,” Clinton said in a speech at Georgetown University.

The United States is one of Egypt’s closest allies, providing it with upwards of $1 billion (763 million euros) a year in military aid