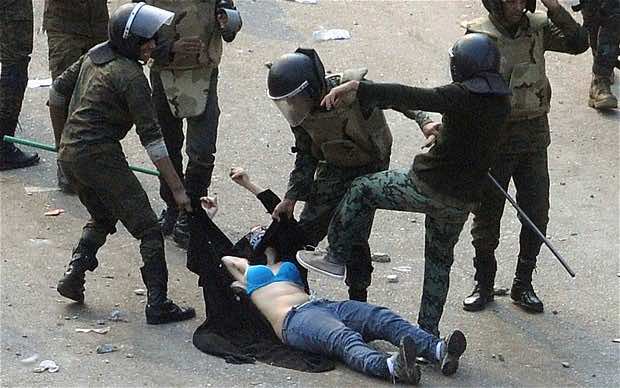 Egypt’s military on Tuesday “strongly regretted” what it called “transgressions” against protesters, in a statement addressed to women after soldiers beat and stripped a female demonstrator.

The military would take legal action against those responsible for the abuse, said the statement, which came after a women’s march in Cairo denouncing attacks on female protesters.

“The Supreme Council of the Armed Forces expresses its strong regret to the great women of Egypt over transgressions that occurred during recent incidents in the protests outside parliament and the cabinet,” it said in the statement.

The military respected women’s right to take part in protests and had taken “all legal measures to hold accountable the people responsible for these violations,” said the statement posted on the military’s Facebook page.

Pictures and video of soldiers beating and partly stripping a veiled woman as they dragged her sparked outrage in Egypt, where clashes between anti-military protesters and security forces marked their fifth day on Tuesday.

A military spokesman told AFP that the soldiers who beat protesters were not acting on orders and had been enraged by attacks on themselves.

Pictures of troops kicking the woman, as one soldier apparently grinned, sent shockwaves among activists and the independent media.

“The forces that violate the honor (of women),” read a headline in the independent daily Al-Tahrir above a picture of a soldier grabbing a woman by the hair as another raised a club over her.

US Secretary of State Hillary Clinton on Monday accused Egyptian authorities of failing women as she denounced the stripping and beating of the female protester as “shocking.”

In unusually strong language, she accused Egypt’s new leaders of mistreating women both on the street and in politics since the popular revolt that overthrew president Hosni Mubarak in February.

“This systematic degradation of Egyptian women dishonours the revolution, disgraces the state and its uniform, and is not worthy of a great people,” said Clinton.