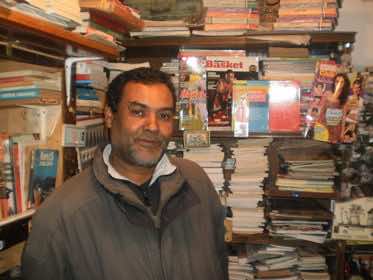 Kenitra – Kassam tells his story and his love for selling second-hand books.

Deep within the popular districts of Kenitra, a Moroccan city founded during the French colonization at the beginning of the twentieth century, Kassam, a fired policeman, has decided to make his business and earn his living.

Kenitra has always been a refuge for people who are looking for a job or a living, especially for those who come from the surrounding villages like Bellakseri, the hometown of Si Kassam.

“Many people find Kenitra a nice place to live since it is so sociable and living in it does not cost much,” said Kassam.

“Kenitra is a wonderful city. It is endowed with many things. You have the forest, beach, river, lake  and much more. It is really an amazing city but people here say it has been neglected, particularly during the era of Hassan II. The city of Kenitra was the starting point of the failed Republican Coup which was plotted by General Ofkir in 1972. Kenitra experienced a dark period under Hassan II’s regime, who used to call it (medina Maskhouta), the cursed city,” Kassam stated holding his cigarette,

At first, Kassam told me that he had been a policeman but was fired as a result of helping to counterfeit some legal documents. While I was talking, I felt that Kassam did not want to talk about that event and he always tried to talk about something else.

Being kicked out of a job, Kassam found himself in the street with no one to lend a hand or provide encouragement. The first days were very difficult for him to accept the shock of losing his job, and his new situation.

“I suffered so much and what made me most sick is when you see your friends move away from you.”

But, after a long time of agony, Kassam made up his mind to start a new business. He would sell secondhand items in the markets of Kenitra in order to rebuild his life and get out of his predicament.

“I had never thought of selling books, (Sohana Allah) God Almighty,” he said.

The idea of selling books came about overnight he explained: “While I was in the market, as usual selling used shoes, an officer who I had worked with in the General Administration in Rabat suggested I could go to the library of the province to get some of its books for very little money. I did not like the idea at first, but he convinced me that it would be a very profitable and a money-making business.”

“Once I arrived at the library I couldn’t believe my eyes. It was full of books and some people had already taken some. In fact, I took as much as I could and I brought them to the market. From that moment I felt that books could provide good work”.

Having narrated how he had started selling secondhand books, a client, who I think was a French  teacher and who was looking at some books, said, “Sometimes jobs look for people, instead of people looking for jobs.”

Kassam used to push his (caroussa) cart to the market in the morning and afternoon. He would spread out his tarp besides Ibn Tofail University campus.

“It was a good time. I earned a lot of money, but at the end, I made up my mind to rent a small shop where I could sit and conduct my business and leave the life of moving around. Every one now knows that I am here, so there is no need to keep moving from one place to anther,” he said.

Kassam used to push his carousa from one market to another looking for secondhand books, yet now things have changed. People on their own bring their books to his shop to be sold.

“I am famous now, yet I sometimes go to Rabat to buy secondhand books, for they are more accessible than here”, he said.

While I was filming the shop, a picture of a young, brown man with a messy hair hanging on the wall caught my attention.

“It is me. I was a soccer player. You see, I was strong. I played with a Belakseri team. Ahh ! I have missed those days,” he stated, raising his elbows that revealed his nostalgia.

This picture is a source of inspiration for Kassam. Each time he looks at, he recalls his early days in Belakseri, where he was born and finished his primary studies, as well as Sedi Kassam city where he received his baccalaureate diploma.

Belakseri, the home town of Kassam, is a small village to the north of Kenitra and you can say that its rural aspects still shape people’s life there in one way or another. Many Belakseri people have migrated to Kenitra or other big Moroccan cities where more services and jobs opportunities are provided.

“Such people who move from the countryside to the city only get the toughest jobs; dirty and not well-paid. Such jobs are usually avoided by the city citizen,” Kassam said.

Historically speaking, the first settlers of Belakseri or more broadly Kenitra and the surrounding area are know as Garbawa. Originally they were Arabs and came to Morocco during the Marinyeens dynasty from the Arabian Peninsula to settle in the Garb region, in the west of the country.

“Garbawi people are well known for an amazing dance called Hait. This dance reflects the culture of the Garb region and usually singers sing songs related to agriculture and the land. I use to dance it when I was young,” Kassam said.

Kassam’s shop, in fact, is very small and you can say it is somehow organized. There are four shelves. Each one holds books of a different language and there is a bed at the doorstep of the shop which has been turned into a flat table for exhibiting some magazines.

The majority of books are in Arabic and French and some are in English and Spanish. Besides books, you can also recognize some old shoes and traditional items.

“Today, selling books is not enough to live off. Sometime I have to sell other things to cover the expenses of every day life,” he explained.

However, I dare to say that I am a regular client of this bookshop. I have bought dozens of books, mostly Arabic ones. Books here are so cheap. That is, a new book that costs normally 300 DH in the bookshop, you can find here for just 10 DH. It is such a blessing!

Most of the clients of Kassam’s bookshop are university students, but you can also meet sundry readers and sometimes university teachers.

“Kassam is a blessing today,” said Eli, a teacher of Arabic at Masera high school.

“Kassam is one of those rare people who follow the slogan the poor first,” Morad Karisma, a graduate student of Theater Studies, said.

Kassam is not that sociable of a person. He hardly wears a smile or tells a joke, which might be due to the shock of once having lost his job, while others attribute this to something else.

“He deals with most customers harshly and all policemen are like this. They have no kindness in their dictionary,” Hmed, a student of Geography at Ibn Tofail University, said.

REMEMEBER, Losing a job such as a position like a police officer is not easy to endure, and means a lot in a country like Morocco, which is full of jobless people. Kassam has learned not to trust anyone because he believes that trusting people was the main reason why he was dismissed from his job.

More to the point, one time I was in his shop checking out some books with the prospect that I might come across an interesting one. A client in his late twenties was trying to convince Kassam to let him take a book and pay him back tomorrow, but Kassam turned him down.

When the client had left, Kassam told me: “This is how I missed my job. I used to trust everyone, but not any more. I have learned so much!”

“Remember, do not trust everyone and do not accompany or hang around with everyone,” he added outraged.

In fact, Kassam has married eight women .I was shocked when he told me this.

Imagine, eight women. He has three sons and one daughter and all of them are living with their moms. It is also worth mentioning that all of Kassam’s previous wives had occupations.

“Now I have no interest in women with jobs. If you are married to a woman who works outside, you have to accept her freedom and many things. Maybe some people can, but I can not. Now I am married to a house wife who does not bring up kids. Allah has sent her to me. I am happy with her.”

Kassam believes that selling books is a noble job. Thanks to this job, he keeps in touch with reading and is up to date with the latest news.

“Such a job has helped me know many things that I did not know before,“ he said.

Selling books goes hand in hand with his needs, way of thinking, and personality. “I can not live now without doing that. Books are my life. In other words, they are the oxygen by which I breathe and stay alive.”

Selling secondhand books is not easy. It needs somebody who is a professional at adjusting and amending those books. Kindly put, before selling a book, Khassam tries as much as possible to make it clean, attractive and worth buying.

“Selling secondhand books is an art before it is a job,” Kassam said.

When Kassam talks about his life as a policeman he refers to it as “the ignorant life.”

“It made me act like an animal. It is full of corruption and injustice. Besides, it takes your freedom and sometimes your dignity. I chose to work as a policeman not because I liked such a job. Not at all; financial problems and needs pushed me to do that. There was no other choice. Selling books is much better. I am now a newborn man,” he said.

If I was asked to give Kassam’s story a title, I would say: The Bookmaker and Eight wives.

Mohammed Qasserras is s a teacher of English in Rabat.  He received his B.A in English Studies and Culture. He has published a number of articles and short stories in different publications. In 2009 he was selected as the best Moroccan writer ( short story category) by British Council in England with an incorporation with the university of London in Paris which allowed him to participated in Médi-Café Trans- Maghreb Creative Writing Project which brought writers from Morocco, Algeria, Tunisia and Britain in a unique form that enriched all partners. In 2010 Mohammed was a visiting Fulbright Scholar at City University of New York teaching Arabic Studies and Culture.