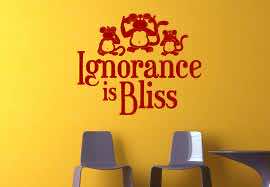 Even though some of us, especially writers, enjoy reading, at times, we can’t help falling prey to the plight of reading. The latter is a form of stress and mental tiredness a reader feels reading through a novel or a long short story. Those who are reading for pleasure are exempted here.

The plight of reading mostly concerns readers who are willing to write, and who therefore set to mentally analyze every structure, diction, and all other techniques of writing employed in a certain literary piece. Recently, as I went to a solitary cafe next to the beach in Sidi Ifni with the purpose of perusing a book alone, an idea struck my mind. It was that ignorance is bliss.

As I sat at the table, burying my head in the book concerned with linguistics, my eyes couldn’t help falling on a couple sitting opposite me. I could hear their laughter, and I could feel the glee they were indulging in as they were talking. I could also see their cheerful faces, and the romantic movements they made from time to time.

As for me, I was racking my brain, forming helpless wrinkles on my brow, and I was sure if anyone had examined my face from a distance, he would have pitied me for the mood I was in. I was then simply reading, though. Only the couple felt the bliss, while I didn’t, simply because they ignored knowledge at the time, while I sought it. Oh, how much bliss there is in ignorance!

There were many times when I paid my home town, Tafraout, a visit, and I usually met many old villagers who had never been to school and who had never held a book in their lives. They had never racked their brains to learn something, either.

All they do or had done was plough the ground next to their homes and water the plants and trees that were growing there. And when the time of harvest comes, they sell the produce. I have sat with them under some trees. Some of them narrated some exciting tales to me. Some sang me traditional songs, and never bothered to tell me about their worldly concerns.

The issues they raise to me range from this year’s cold and rainy weather to the moral lesson their ancestors passed on to them. They don’t even know what is going on in the world. I swear their faces wore cheerful and blissful expressions. Their being unaware of many harsh realities of today has given them real bliss.

It is true scientists, teachers, doctors, inventors, etc. have benefited mankind so enormously, but whenever you come across the people in question, you find them worrying about a possible remedy to AIDS, for instance. One may catch some poets on a solitary hill contemplating nature, and holding thoughtful expressions on their faces. One may catch teachers worrying about disruptive behavior in class, about how to teach a lesson in the most appropriate manner, and about updating their knowledge.

One may find an inventor, like Edison, staying up late at night and thinking of inventing a car engine that doesn’t need gasoline to start moving. One may find a writer re-writing a whole novel, and redoubling his efforts to come up with the finest, finalized version ever. They may even suffer nightmares after they go to bed, tired of such mental gymnastics. Here, if they were ignorant about all this, they would surely fall fast asleep and even dream sweet dreams.

On the other hand, masons, greengrocers, couples during courtship, the illiterate, rarely or never wear thoughtful and worried expressions. The mason, for instance, goes out for a walk once he finishes his toil, and never thinks about a misplaced brick or unwatered cement late that day. The same thing is true of greengrocers.

They never worry about how the tomatoes he sells start to grow as seeds, plants, and then ripens. All they worry about is to sell all vegetables and fruit the soonest possible. And this worry of theirs disappears incredibly fast, while that of the biologist stays with him or her for long. Greengrocers sleep peacefully after they get rest, and they find it easy to sleep, for toil leads to drowsiness, whereas thinking too much leads to staying up.

The illiterate know nothing about the worldly concerns. That is why they too find bliss in everything they do for the simple reason that they don’t have to rack their brains to benefit mankind. They rather find bliss in ignorance. Have a close look at their faces, and contrast them with those of the literate.

Omar Bihmidine is  high school teacher of English. He obtained his Associate Degree at Choaib Eddoukali University in 2008. His writings take the form of short stories, poems and articles, many of which have been published in Sous Pens magazine, in the ALC magazine in Agadir, and in the late Casablanca analyst newspaper .