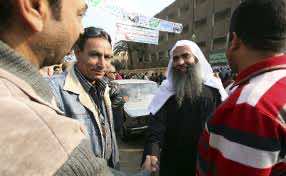 A spokesman for Egypt’s main Salafist party on Wednesday pledged that the hardline Islamist group would respect the peace treaty with Israel in an unprecedented interview with an Israeli radio station.

“We are not against the (1979 peace) agreement but we say that Egypt is committed to the agreements signed by the previous governments,” Al-Nur spokesman Yusri Hammad said in a telephone interview with Israel’s army radio, in which he spoke in Arabic.

“If there are some clauses that the people of Egypt want to change in the agreements, then these belong on the negotiating table,” he said. “We respect all treaties.”

Al-Nur is the main party of the Salafists, whose members follow a strict form of Islam dominant in Saudi Arabia.

The hardline faction was initially part of the Democratic Alliance coalition led by the Muslim Brotherhood, but they broke away to form the Islamic Alliance, which calls for a strict interpretation of Islamic law.

Hammad said the Salafists image had been “distorted” by the media and by other elements who were against Islamist elements ruling Egypt.

The interview prompted surprise in Israelthat a member of the Egyptian Salafist movement would grant an interview to an Israeli media outlet, particularly one associated with the military.

“We were surprised by this interview,” a senior government source told AFP. “It gives us, without any doubt, something to think about regarding what is happening in Egypt.”

Hammad’s remarks were made as Egyptians turned out to vote in the run-off of a second round of legislative polls.

Since voting began just over three weeks ago, Egypt’s main Islamist parties — Al-Nur and the Muslim Brotherhood’s Freedom and Justice Party — have emerged as the front-runners, trumping their liberal rivals.