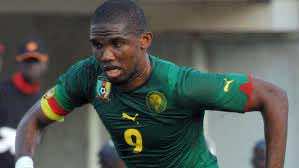 Cameroon’s government is monitoring the situation after the decision by the country’s football federation to suspend captain Samuel Eto’o for 15 matches.

The punishment, handed down on Friday after the federation said Eto’o had persuaded team mates not to travel to Algeria last month for a friendly, has led to widespread criticism in the soccer-mad central African country.

Sports minister Adoum Garoua issued a statement calling for calm and said the government was looking at the possibility of bringing the various parties together.

Cameroon vice-captain Enoh Eyong was also banned for two games for his part in the strike that led to the game in Algiers being called off.

“It is very shocking and a disaster that a key player like Eto’o be banned from the national team for 15 matches,” said Milla, who played in three World Cups.

“This effectively means a three-year ban, which is bad for Eto’o, who is 30 years old, and could result in his early retirement from international football.

“Why should they inflict such a heavy punishment on one player when it is the entire national squad that took the decision? This is not fair,” added the striker.

The president of the Cameroon footballers’ trade union David Mayebi described the sanction as “too harsh”, and suggested to reporters his organisation would consider possible action to force a lifting of the ban.

“A player like Eto’o has done so much for our national football team. If the federation does not go back on the decision, we think the government should take strong action against them,” he said.

“We cannot sit back with our arms folded and watch the federation destroy our national squad.”

Mayebi said Cameroon had no chance of making it through the 2014 World Cup qualifiers starting in June without Eto’o, four-times African Footballer of the Year.

“Samuel Eto’o incited the national team not to travel to Algeria and said he was ready to assume full responsibility for any action that was taken,” said Tombi a Roko.

The players were upset because they said they had not received money promised for their appearance in a four-nation tournament held in Morocco the previous weekend but Tombi a Roko said his federation had never promised to pay any bonus money.