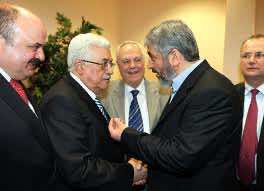 Palestinian president Mahmud Abbas and Hamas leader Khaled Meshaal were meeting in Cairo on Wednesday night for the second time in less than a month, for talks seeking to reconcile Palestinian rivals.

The two men arrived in the Egyptian capital during the evening and began talks shortly afterwards, Azzam al-Ahmed, head of the delegation of Abbas’s Fatah movement told AFP.

All the main Palestinian factions, led by the former rivals Hamas and Fatah, are meeting in the Egyptian capital seeking to thrash out ways of implementing a reconciliation deal that was signed in May but has never been implemented.

Earlier on Wednesday, delegates discussed ways to reactivate the Palestinian national parliament, the Palestinian Legislative Council (PLC), which has been paralysed since 2007, when Hamas forced Fatah forces out of the Gaza Strip, splitting the Palestinian territories into two rival administrations.

“We agreed on the need to convene the Palestinian Legislative Council in early February,” independent MP Mustafa Barghuti told AFP.

“We agreed to convene the council as soon as possible and that all decisions on its operation would be taken by consensus among the parliamentary groups,” he added.

“A meeting of all parliamentary groups in the West Bank and Gaza will be held on the 15th of next month in light of the convening of the council,” Barghuti said.

On Tuesday, delegates agreed to set up a new electoral commission and also set a deadline for the formation of a caretaker cabinet of independents as envisaged in the May agreement.

During the talks, the factions agreed to form a nine-member Central Election Commission (CEC) under the committee’s current head, Hanna Nasser.

Abbas, who has said elections will be held in May, will have to approve the composition of the CEC, Ahmed told AFP.

Despite the success of Tuesday’s talks, the factions have postponed debate on two key issues: formation of an interim government and unifying the disparate security forces, Ahmed said.

“Regarding the cabinet, delegates agreed on the need to form a government
of national consensus by the end of next month at the latest,” he told AFP.

Talks were under way “to resolve the problem of the government,” while a reform of the security services would be tackled only after a cabinet had been formed, he added.

Hamas confirmed the Fatah timeline in a statement, saying it also hoped “to secure the release of political prisoners before the end of January.”

On Thursday, Abbas will preside over a high-level meeting to discuss reforming the Palestine Liberation Organisation (PLO) to allow Hamas and Islamic Jihad to join.

Meshaal and Islamic Jihad chief Ramadan Shallah will also attend the talks along with all the other faction heads, members of the PLO Executive Committee and the speaker of the Palestinian National Council, Selim Zaanoun.

The May reconciliation deal signed by the two former rivals called for the establishment of a caretaker cabinet which would prepare for legislative and presidential elections within a year.

Abbas and Meshaal last met on November 24 in Cairo when they approved a two-page document reiterating their commitment to the main elements of the original deal.