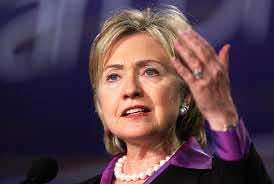 “Egypt will not accept any interference in its domestic affairs,” Mohammed Amr told reporters.

He said Cairo was seeking “clarifications over any statements by any foreign official regarding internal Egyptian matters.”

On Monday, Clinton accused Egypt’s new leaders of mistreating women both on the street and in politics since the uprising that overthrew Hosni Mubarak in February.

“This systematic degradation of Egyptian women dishonours the revolution, disgraces the state and its uniform and is not worthy of a great people,” Clinton said in a speech at Georgetown University.

Other pictures circulating on social media networks that have enraged protesters include one of a military policeman looming over a sobbing elderly woman with his truncheon.

“Recent events in Egypt have been particularly shocking. Women are being beaten and humiliated in the same streets where they risked their lives for the revolution only a few short months ago,” Clinton said.

“Women protesters have been rounded up and subjected to horrific abuse. Journalists have been sexually assaulted and now women are being attacked, stripped and beaten in the streets.”

On Tuesday, the Supreme Council of the Armed Forces which took power when Mubarak was ousted, apologised to “the great women of Egypt over transgressions that occurred during recent incidents in the protests outside parliament and cabinet.”

At least 14 people have been killed in five days of the latest clashes pitting police and army troops against protesters demanding an end to military rule.

Protesters have called for a mass rally on Friday in Cairo’s Tahrir Square to denounce the military’s heavy-handed tactics against demonstrators.