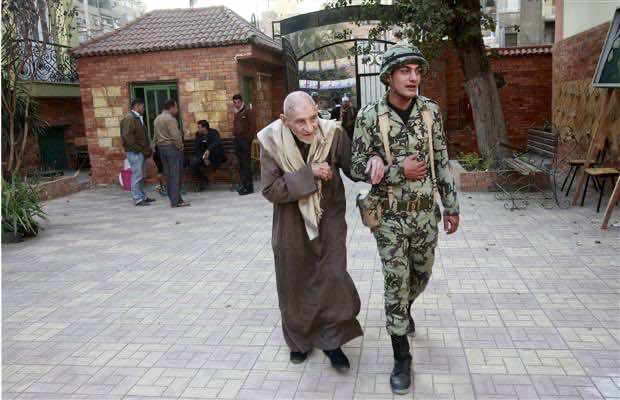 Egyptians trickled into polling stations on Wednesday in the run-off of a staggered election marred by clashes between protesters and security forces that have left 14 people dead in five days.

Polling began at 8:00 am (0600 GMT) in a third of the country’s 27 provinces with a visibly lower turnout than in previous rounds, AFP reporters said.

The run-off in the second phase of legislative polls, taking place over two days, will see the two largest Islamist parties go head to head for 59 seats in the lower house.

The ruling military has decided on a complex election system in which voters cast ballots for party lists, which will comprise two-thirds of parliament, and also for individual candidates for the remaining third of the lower house.

On Wednesday, voters are choosing individual candidates in nine provinces as well as party lists in three provinces where voting was postponed because of administrative problems in the opening phase.

The Supreme Council of the Armed Forces (SCAF) has repeatedly pointed to the elections, the first parliamentary polls since a popular uprising ousted Hosni Mubarak in February, as proof of its intention to hand power to civilian rule.

The procedure to elect a full assembly ends in March, and presidential elections are expected by the end of June.

The elections have exposed a deepening rift among Egyptians. Some see them as the first step to democratic rule, while others say the new parliament –whose function remains unclear — leaves control in the hands of the military.

The SCAF has also faced growing outrage over its heavy-handed tactics against demonstrators.

Deadly clashes that erupted on Friday pitting troops and police against protesters demanding an end to military rule have piled pressure on the SCAF, with liberals and Islamists uniting to condemn its handling of the transition.

On Tuesday, the military apologised for attacks on female demonstrators that had prompted local and international outrage.

The generals, facing a backlash after videos circulated of soldiers beating female protesters and partly stripping a veiled woman as they dragged her, pledged action against those responsible in an unusually contrite statement.

The apology came hours after the country’s forensics chief cast further doubt on the generals’ credibility when he said most protesters killed died of gunshot wounds, despite military denials they had fired on demonstrators.

However, Foreign Minister Mohammed Amr on Wednesday slammed foreign “interference” following impassioned comments by US Secretary of State Hillary Clinton denouncing the stripping and beating of the female protester.

“Egypt will not accept any interference in its domestic affairs,” he told reporters.

On Monday, Clinton accused Egypt’s new leaders of mistreating women both on the street and in politics since February.

“This systematic degradation of Egyptian women dishonours the revolution, disgraces the state and its uniform and is not worthy of a great people,” she said in a speech at Georgetown University.

A dozen pro-democracy movements have called for a mass rally on Friday in Cairo’s Tahrir Square to denounce the military’s violent tactics against protesters, dubbed “the Friday to redeem honour and save the revolution.”

Despite clashes before and during the elections, the voting process itself has been orderly and mostly calm, with Islamists emerging as the front-runners.

The Muslim Brotherhood’s Freedom and Justice Party said it won 39 percent of votes in the party lists, with 49 individual candidates vying for seats in Wednesday’s run-off.

The Al-Nur party, which represents the more hardline brand of Salafi Islam, has claimed more than 30 percent of the votes in the lists and has 36 candidates competing in the run-off.

In the first round which began on November 28, Islamist parties trounced their liberal rivals, securing around 65 percent of all votes cast for parties.

The Muslim Brotherhood had been widely forecast to triumph as the country’s most organised political group, well known after decades of charitable work and opposition to Mubarak’s 30-year regime.

But the strong showing by Salafist groups, which advocate a fundamentalist interpretation of Islam, was a surprise, raising fears of a more conservative and overtly religious 498-member new parliament.

Concerned by Egypt’s political instability and economic woes, Moody’s Investors Service said it downgraded Egypt’s government bond rating from B1 to B2 on Wednesday and placed it on review for further possible downgrade.