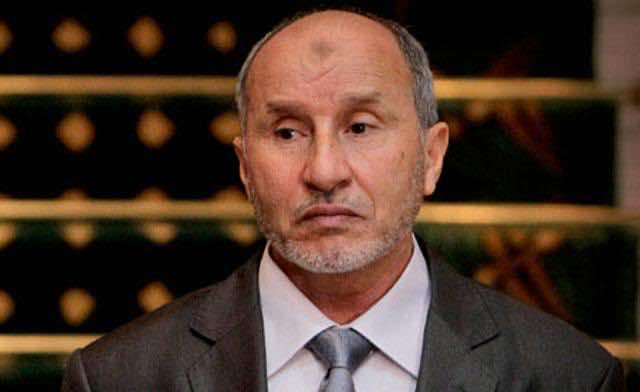 Mustafa Abdel Jalil, the head of the Libyan National Transitional Council (NTC), told Al Arabiya TV that there are infiltrators in his close circle who are receiving orders from Saadi Qaddafi from Tunisia.

Abdel Jalil said that the Libyan intelligence has “phone calls” as proof.

“We have proof that there are some elements working with us who are receving orders from al-Saadi al-Qaddafi,” he said in an Al Arabiya interview with the Noktet Nizam TV program (Point of Order), which will be aired on Friday.

Saadi, who was the commander of Libya’s Special Forces and participated in the 2011 Libyan civil war, is wanted by Interpol.

In early December, Mexicosaid it had broken up an international plot to smuggle Saadi and his family into the country under false names and with false Mexican documents.

Meanwhile, the NTC chief rejected claims that Libyan fighters are outside the country helping Syrian opposition in their fight against Bashar al-Assad’s regime.

“No to Libyan fighters outside Libya,” he said, adding, “We have ousted Qaddafi and that’s enough.”

But he did not deny that he promised the Syrian opposition humanitarian aid.

In the interview, he promised the formation of tribunals to look into criminal records of those now working in the new Libyan regime, including himself.

He also said that there are ongoing investigations to find those that killed the former strongman, as well as to discover the identities of those behind the murder of Abdulfatah Younis, a senior military officer, who resigned on February 2011 as the minister of interior to join the rebels.

Younis was reported dead by the NTC in July 2011.

Al-Sadr was an Iranian-Lebanese philosopher and Shiite religious leader who, it is believed, was executed by the Qaddafi regine in 1978.

Sadr’s disappearance was a major dispute between Lebanon and Qaddafi.
Abdel Jalil said that next week would see the start of the trial of Saif al-Islam, Qaddafi’s second son, and the rest of the Qaddafi regime loyalists who are under arrest.

Saif al-Islam was part of his father’s inner circle, performing public relations and diplomatic roles on behalf of the leader; Saif was was mentioned as a possible successor to Col. Qaddafi.

He will face charges of crimes against humanity against the Libyan people for allegedly torturing and killing civilians, an ICC charge that he has denied.

Abdel Jalil said that on December 24 the country will begin to incorporate former NTC fighters into the army and police forces.