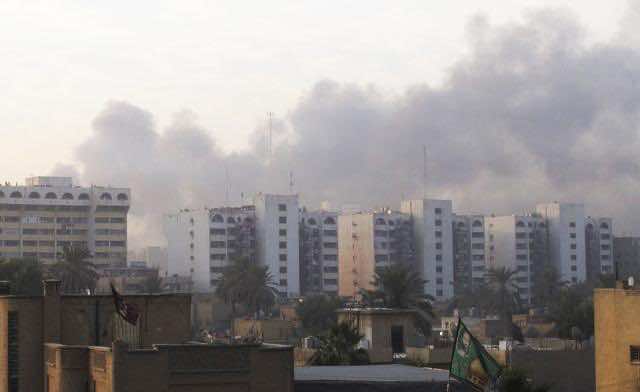 A wave of bomb attacks across Baghdad on Thursday killed 63 people, the health ministry spokesman said, as Iraq faced a political crisis, with its vice president accused of running death squads and the premier warning he could break off power-sharing.

Ministry spokesman Ziad Tariq said 63 people were killed and 179 wounded in 10 attacks across the capital. An interior ministry official earlier said there had been 11 attacks.

More than 10 explosions struck Baghdad on Thursday morning, in the first apparently coordinated attack on Iraq’s capital since a crisis erupted between its Shi’ite-led government and Sunni rivals after the withdrawal of the last U.S. troops.

More bombs ripped into the central Alawi area, Shaab and Shula in the north, all mainly Shi’ite areas, and a roadside bomb killed one and wounded five near the Sunni neighborhood of Adhamiya, police said.

The violence comes with Iraqi politicians at loggerheads over a warrant issued for the arrest of Vice President Tareq al-Hashemi, with Prime Minister Nuri al-Maliki demanding that Kurdish authorities hand over the Sunni leader, who is holed up in their autonomous region.

Hashemi denies the charges that he was responsible for the recent bombing that targeted the parliament in the green zone.

Maliki has also called for his Sunni deputy Saleh al-Mutlak, who belongs to the same Iraqiya bloc as Hashemi, to be sacked after he described the Shi’ite-led government as a “dictatorship.”

Iraqiya, meanwhile, has boycotted parliament and the cabinet, and Maliki has threatened to replace their ministers in the national unity government.

Washington has urged calm, with the crisis coming just days after U.S. troops completed their withdrawal, leaving behind what U.S. President Barack Obama described as a “sovereign, stable, and self-reliant Iraq.”

Thursday’s attacks were the first major offensive in Baghdad since November when three bombs exploded in a commercial Baghdad district and another blast hit the city’s western outskirts on Saturday, killing at least 13 people.

In October, bomb attacks on a busy commercial street in northeasternBaghdad killed at least 30, with scores wounded.