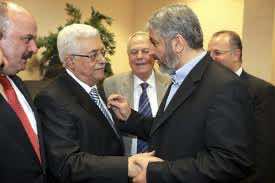 Palestinian president Mahmud Abbas and Hamas leader Khaled Meshaal were on Thursday to discuss reforming the Palestine Liberation Organisation (PLO) in a bid to allow the Islamist movement to join.

The two men began meeting in Cairoat around midday (1000 GMT) for talks marking the culmination of three days of discussions between Hamas, Fatah and the other 13 Palestinian factions aimed at thrashing out a stalled unity deal.

Islamic Jihad is also hoping to join the PLO and the group’s leader, Ramadan Shallah, will attend the talks along with all the other faction heads, members of the PLO Executive Committee and the speaker of the Palestinian National Council (PNC), Selim Zaanoun.

Fatah delegation chief Azzam al-Ahmed said the meeting would look at the possibility of setting up a new PLO leadership body which would be “the first concrete application of the Cairo agreement, of the reconciliation and of the partnership between all the political forces”.

The new body “will focus on the restructuring of the PLO leadership and of the PNC,” he said, referring to the PLO’s parliament-in-exile which has more than 650 members on its books but which has not met in full session for 15 years.

It would also discuss “the next stage in PLO’s political programme” which would have to be approved by a new session of the PNC, Ahmed said.

“This body will demonstrate the incontestable fact that the PLO is the only legitimate representative of the Palestinian people,” he said.

Hamas officials confirmed that the meeting would look at the proposed new body’s “mechanisms of action and how different factions could join it.”