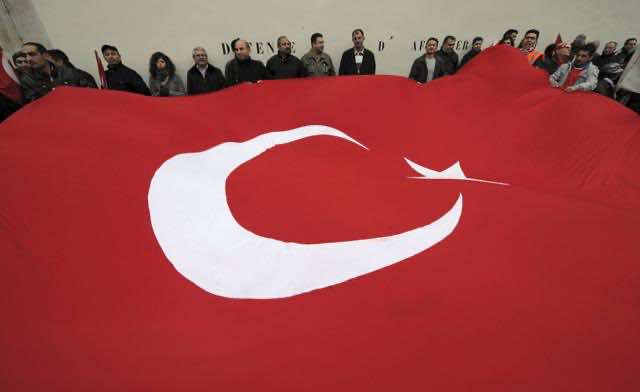 Turkey’s Prime Minister Tayyip Erdogan said on Thursday a bill passed by France’s lower house of parliament, making it a crime to deny genocide, was racist, discriminatory and xenophobic and said it had opened wounds with Paris that would be difficult to heal.

Erdogan said Turkey was cancelling all economic, political and military meetings with NATO partner France and said Ankara would cancel permission for French military planes to land and warships to dock in Turkey as a result of the bill, according to Reuters.

The French bill, which will next be put to the Senate, or upper house, for debate in 2012, has triggered outrage in Turkey as it would include the 1915 mass killing of Armenians in Ottoman Turkey.

“From now on we are revising our relations with France.

Most of the sanctions imposed on France, a NATO ally, will be in the military sphere, according to AFP.

Turkey will now decide on a case-by-case on every military demand made by EU member France to use Turkish airspace and military bases, Erdogan said, and will from now on reject any French demand for its military vessels to dock at Turkish ports.

Erdogan said Turkey would boycott a joint economic committee meeting in Paris in January and would not take part in twinning projects with France.

Earlier on Thursday, French lawmakers easily passed a measure to make it a crime to deny the mass killings of Armenians in 1915 by Ottoman Turks amounted to genocide, The Associated Press reported.

Turkey, a NATO member, is a strategic ally of France and valued trading partner, and the moves diminish ties at a particularly crucial time. Paris and Ankara are both deeply involved in international issues from the uprising in Syria to Afghanistan.

It was clear long before the vote – easily passed with a show of hands – that France was on a collision course with Turkey. Ankara had threatened to remove Ambassador Tahsin Burcuoglu if French lawmakers did not desist and warned of “grave consequences” to political and economic ties.

Turkey vehemently rejects the term “genocide” for the World War I era-mass killings of Armenians, saying the issue should be left to historians. It contends that France is trampling freedom of expression and that President Nicolas Sarkozy is on a vote-getting mission before April presidential elections.

An estimated 500,000 Armenians live in France and many have pressed to raise the legal statute regarding the massacres to the same level as the Holocaust by punishing denial of genocide.

“We must not mix freedom of opinion with propaganda,” conservative lawmaker Patrick Devedjian, who is of Armenian origin, said before lawmakers in arguing for the measure, AP reported.

“Would you accept today that Germany denies the Holocaust and that it spreads abroad, to France, a negationist propaganda? No,” he said later before journalists. “So why should we accept that from Turkey.”

France formally recognized the killings as genocide in 2001, but provided no penalty for anyone denying that. The bill sets a punishment of up to one year in prison and a fine of €45,000 ($59,000) for those who deny or “outrageously minimize” the killings by Ottoman Turks, putting such action on a par with denial of the Holocaust.

In Washington, President Barack Obama has stopped short of calling the killings genocide.

“Our ancestors can finally rest in peace,” said 75-year-old Maurice Delighazarian, standing outside France’s National Assembly. He said his grandparents on both sides were among the victims of the 1915 massacre.

Vaskel Avedissian, 25, said he spent time with Turkish demonstrators outside the National Assembly earlier Thursday and “These people have nothing against Armenians.” But, he added, “Turkey is the spokesman for state negationism today.”

Lawmakers denounced what they called Turkey’s propaganda effort in a bid to sway them.

“Laws voted in this chamber cannot be dictated by Ankara,” said Jean-Christophe Lagarde, a deputy from the New Center party, as Turks demonstrated outside the National Assembly ahead of the vote.

The bill’s author said she was “shocked” at the attempt to interfere with the parliament’s work.

Speaking to journalists after the vote, Boyer said that Turkey’s threats to retaliate are not in line with its desire to join the European Union.

“The attitude of this country (Turkey) which is knocking on the door of Europe and which starts by threatening France with retaliation … seems to me absolutely paradoxical,” said Boyer.

An initial bid to punish denial of the Armenian genocide failed earlier this year, killed by the Senate five years after it was passed by the lower house.

French authorities have stressed the importance of bilateral ties with Turkey and the key role it plays in sensitive strategic issues as a member of NATO, in Syria, Afghanistan and elsewhere.

However, Sarkozy has long opposed the entry into the European Union of mostly Muslim Turkey, putting a constant strain on the two nations’ ties.

Turkish authorities have weighed in with caustic remarks about France’s past. Erdogan has recalled France’s colonial history in Algeria and a 1945 massacre there, as well as its role in Rwanda, where some have claimed a French role in the 1994 genocide.

“Those who do want to see genocide should turn around and look at their own dirty and bloody history,” Erdogan said last weekend. “Turkey will stand against this intentional, malicious, unjust and illegal attempt through all kinds of diplomatic means.”

Turkish President Abdullah Gul spoke out on the issue this week, saying it will “put France in a position of a country that does not respect freedom of expression and does not allow objective scientific research.”

Turkey insists the mass killings of Armenians – up to 1.5 million, historians estimate – occurred during civil unrest as the Ottoman Empire collapsed, with losses on both sides. Historians contend the Armenians were massacred in the first genocide of the 20th century.

France is pressing Turkey to own up to its history for the sake of “memory” just as the French have officially recognized the role of their state – the collaborationist Vichy government – in the deportation of Jews to Nazi death camps during World War II.

In October, Sarkozy visited Armenia and its capital of Yerevan, urging Turkey to recognize the 1915 killings as genocide.

“Turkey, which is a great country, would honor itself by revisiting its history like other countries in the world have done,” Sarkozy said.

France, however, took its own time recognizing the state’s role in the Holocaust. It was not until 1995 that then-President Jacques Chirac proclaimed France’s active role in sending its citizens to death camps. And it was only in 2009 that his historic declaration was formally recognized in a ruling by France’s top body, the Council of State.

Richard Maillie, a UMP lawmaker, said in arguing for passage of the bill that France’s recognition in 2001 of the Armenian killings as genocide “is not sufficient.”

“It would be better (for Turkey) to simply recognize this genocide and ask for pardon,” Maillie said, as France did for the Holocaust.