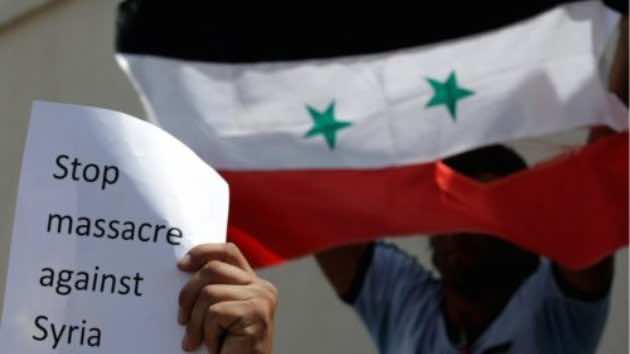 Western nations and Russia heightened UN Security Council tensions Thursday over talks on a resolution on the worsening government crackdown in Syria.

Russia renewed demands for an inquiry into NATO airstrikes in Libya in a move that US ambassador Susan Rice called “a cheap stunt” to divert attention from the Syria crisis.

Russia and China have already vetoed one resolution proposed by European countries condemning Syria. Russia, which accuses the West of seeking regime change in Syria, last week proposed a new text which the European countries say is not tough enough on President Bashar al-Assad.

Western diplomats say they suspect Russia is dragging its feet on the resolution to help its Syrian ally.

Experts from the 15 Security Council nations held only their second meeting on Thursday in the week since Russia surprised its counterparts by putting forward the text.

Britain, France, Germany and the United States proposed amendments on Monday and complain because Russia has still not produced a new text.

At a Security Council meeting on Libya on Thursday, Russian envoy Vitaly Churkin renewed calls for a UN investigation “into the civilian casualties inflicted by the NATO bombing campaign” against Moamer Kadhafi’s regime.

He has repeatedly accused NATO of failing to provide details of casualties from its air attacks. NATO said UN Security Council resolutions on Libya this year authorized the military force.

Churkin failed to persuade other members to agree to the inquiry however. And the Western nations questioned why Russia was pressing for an inquiry in Libya but not Syria.

“It is not an exaggeration to say that is something of a cheap stunt to divert attention from other issues and to obscure the success of NATO and its partners and indeed the Security Council in protecting the people of Libya,” said US ambassador Rice.

Rice and French ambassador Gerard Araud stressed how there is already a UN Human Rights Council inquiry and an International Criminal Court investigation in Libya, both looking in part at the NATO action.

“There are two on-going investigations, so why ask for a third one while we dont have any investigation committee in Syria when in the last three-four days more than 250 people have been killed,” said Araud.

“This is a bit strange so we can say that we have seen today one more ploy.”

Churkin in turn denied that Russia was holding up the Syria resolution though he acknowledged that no new text would distributed until at least Friday when new talks are planned.

The Russian text condemns violence by the Syrian government and opposition but threatens no sanctions. The Europeans have demanded a stronger condemnation of the government, stronger demands for a human rights investigation and greater backing for Arab League action on Syria.

Churkin said the western diplomats had “crossed out almost everything we said and produced their own text with completely different messages in many cases.” He said that some proposed changes were “excessive”.