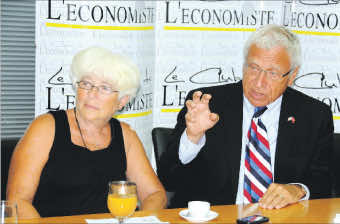 The American foreign affairs department seems to be following very closely the evolution of the reform process in Morocco. Triggered by the 2Oth February nationwide protests, the constitutional reforms were subjected to a national referendum.  The new constitution expanded powers of the head of government and paves the way for a relative, yet unprecedented separation of powers. Soon after, legislative elections provided a resounding victory for the Party of Justice and Development (PJD), a moderate Islamist party renowned for its honesty among the Moroccan electorate.

Last July, American ambassador in Rabat, Mr. Samuel Kaplan, gave a press conference organized by French speaking newspaper “L’Economiste”. According to the daily newspaper Assabah, the American embassy had held a series of secret meetings with the members of ‘Al Adl Wa Lihsane’, an Islamist association banned by the Moroccan regime. The ambassador justified the American activities by the need to know what the Moroccan dissidents advocated, adding that it is normal to have dissidents who are unsatisfied with the government. He emphasized that the Moroccan authorities were informed before of these meetings.

He highlighted the democratic overtures of the monarchy, allowing its dissident groups to voice their opinions about the system of governance in Morocco. He asserted, “The American embassy’s meetings with the ‘Al Adl Wa Lihsane’ association are by no means an act of provocation,” adding that the US chief aim was to become acquainted with the manifold components of Moroccan society whose social make up is rather complex.

‘Al Adl Walihsane’ is a Moroccan Islamist group led by a charismatic leader Sheikh Abdessalam  Yassine. It envisions the establishment of a Moroccan society ruled by Sharia. It operates through a grassroots welfare network and its omnipresent in student unions all across Moroccan universities. The group refuses to take part in a political system in which “corrupt practices” prevail.  It has chosen to remain in the margins of society, but within a highly cohesive structure.

The Islamist group joined the ranks of protesters demanding a constitutional monarchy and more separation of powers. On 18 December, 2011, in what was perceived as a sudden and unexpected development, the ‘Al Adl Walihsane’ association posted a statement on its website, announcing its withdrawal from the 2Oth February movement, which has been spearheading protests in Morocco.

The American ambassador insisted that the constitutional reforms recently issued in Morocco are likely to be consolidated and expands the prerogatives of the Head of government. Kaplan added that “the coming days will show whether the monarch is ready to delegate some of his former powers to the head of government”. “The monarch’s concession of powers is, in itself, a major step towards the reinforcement of democracy in Morocco,” he was quoted as saying.

The American ambassador made it clear that American diplomacy has to fathom the methodology and mechanism of the judicial apparatus in Morocco, if it is to suggest substantial reforms to the judicial system. He added that the legal treatment and rehabilitation of minors should be a top priority, since no society would like to see its teenagers and youth relapse into the same crimes again.

Mr. Kaplan considers that the new constitution stipulates the independence of the judiciary, noting, “the main concern now is the mechanism by which these new reforms can be implemented”. According to the ambassador, “the major achievement for Moroccans is the separation of powers”.

When questioned about the Arab spring, Mr. Kaplan insisted that his country “cannot decree the policies for consolidating democracy in the Arab countries, meaning that these are internal matters that pertain to their national sovereignty”.

He also asserted that the United States supports the protesters’ rights to express their opinions about the ruling regimes. “Authorities should not crack down on protesters who in their turn should abide by the law,” said the U.S. ambassador.

By the same token, Mr. Kaplan praised the positive and patient approach adopted by the Moroccan kingdom towards the demonstrations, adding that the massive protests were the catalyst for these breakthrough reforms. He also made it clear that he does not support any particular faction in a reference to the 20th February movement, though, he is curious to understand better its underlying motives.

The American ambassador hopes that the uprisings in the Arab world can prompt political and peaceful change in a number of countries that were ruled by totalitarian regimes. On the other hand, he warned against acts of violence, while still advocating for legitimate demands.

The Arab Spring was not predictable like the springtime, which the burgeoning of buds foreshadows. Despite being the “omnipotent” super power, the USA and its intelligence services could see the ebb and flow of the Arab tide, but could never have predicted the flood.

The Obama administration facing a “Great Depression” and trying to save the sinking ship, which was the economy, was totally taken by surprise by the uprisings in the Arab countries. Thus, the position of American officials have swayed between an unwavering support to Egyptians and a confusing apathy towards the alarming situations in Bahrain and Yemen.

Truth be told, the Obama administration was oblivious to the ordeals of the masses under despotic regimes such as Egypt, Tunisia and Libya. It was more preoccupied by weighing the pros and cons of any possible action. It has again been the equation of unilateral interests at play, an American specialty.

The attempt to contact different factions in Morocco at this particular juncture is, in fact, a maneuver by American diplomacy to collect enough data for more reliable political forecasts. It is noteworthy that the American ambassador Samuel Kaplan paid a visit to the PJD secretary general, Abdelilah Benkirane, earlier this month at the party’s headquarters in Rabat to congratulate him on his nomination and to “sense the pulse” of the Islamist leadership. One thing is for sure, the American administration dislikes unpleasant “geopolitical” surprises that make them have to scramble their chessmen.

Loubna Flah is a Moroccan national. She earned a master degree in Biochemistry from the Mohammedia faculty of science and technologies. She obtained also a bachelor degree in English studies from Ain Chok University after writing a dissertation about the aspects of sexism in Moroccan Arabic.  She graduated from the Ecole Normale Superieure in Rabat as a high school teacher of English. She conducted an empirical research on critical thinking in EFL teaching in Moroccan high schools.  She is also the founder of the cultural committee at the ENS which is in charge of promoting and organizing cultural events. She is Morocco World News’ correspondent in Casablanca.