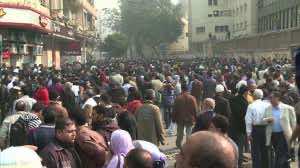 Hundreds gathered in Cairo’s Tahrir Square ahead of a planned mass rally on Friday against the ruling military, which sparked outrage when its soldiers were taped beating women protesters.

Activists and political parties called for the demonstration after days of deadly clashes with soldiers last week left at least 17 people dead and many more wounded, including a woman hospitalised after a savage beating by soldiers.

Supporters of the military, which took power after an uprising ousted veteran president Hosni Mubarak in February, planned a counter-rally in the Abbasiya neighbourhood, several kilometres (a few miles) away.

Egypt has been divided by the clashes between anti-military activists and soldiers which have left at least 60 people dead over the past two months and overshadowed the first elections since Mubarak’s ouster.

The count is under way after run-offs for the second phase of the three-stage election to the lower house of parliament, which is to be followed by a similarly staggered vote for the upper house and then a presidential poll.

The Muslim Brotherhood, whose political arm is leading in the parliamentary polls, refused to back Friday’s protests, which will also demand the military transfer power to civilians before its June 30, 2012 deadline.

The generals, facing a backlash after videos circulated of soldiers beating female protesters and partly stripping a veiled woman as they dragged her, have pledged action against those responsible in an unusually contrite statement.

But they also warned against joining protests they said were aimed at toppling the state, and refused to advance the presidential election.