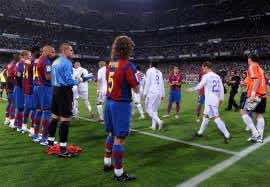 King’s Cup holders Real Madrid and 2011 runners-up Barcelona are on course to meet in next month’s quarter-finals following Friday’s draw for the last 16.

If Real get past Malaga over two legs on January 4 and 11 and Barca dispose of Osasuna, the great rivals will play each other home and away on January 18 and 25.

“To be champion you have to beat all the teams, whether they are from lower divisions or the best,” Real director of football Miguel Pardeza told the club’s website (www.realmadrid.com).

“We are not thinking about it yet (a possible meeting with Barca) and are focused on the Malaga tie,” the former Real player added.

Friday’s draw at the soccer federation headquarters outside Madrid also pitted Valencia against Sevilla and Real Sociedad versus Real Mallorca in the only other all-La Liga clashes.

Real Madrid prevented a Barca clean sweep of trophies in 2011 by beating the Catalans 1-0 inthe Cup final in Valencia thanks to Cristiano Ronaldo’s dramatic extra-time winner.

It was the only silverware Real won in Jose Mourinho’s first season in charge, as Barcelona secured a third straight La Liga title and a second Champions League crown in three years.

They knocked Real out in the semi-finals of Europe’s elite club competition and went on to win the Spanish and European Super Cups and the Club World Cup, taking Barca coach Pep Guardiola’s trophy haul to13 in3-1/2 seasons.