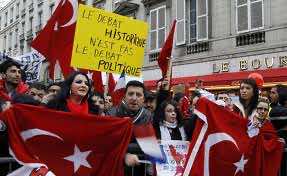 Turkey’s ambassador to Paris has returned to Ankara for consultations following a vote by the French parliament to ban the denial of the Armenian genocide, an embassy spokesman said.

Tahsin Burcuoglu left from Charles de Gaulle airport outside Paris with his wife on a 7.40am (0640 GMT) flight and is expected in the Turkish capital in the afternoon, spokesman Engin Solakoglu told AFP.

“France massacred an estimated 15 percent of the Algerian population starting from 1945. This is genocide,” Erdogan told a news conference after the French move on the 1915 massacre of Armenians by Ottoman-era forces.

Ankara froze military and diplomatic ties with Paris on Thursday after the French parliament approved the draft law, while the Turkish embassy in Paris said its ambassador had been recalled and would leave Friday.

“This is politics based on racism, discrimination and xenophobia,” Erdogan said on Thursday, warning of “irreparable damage” to relations and suspending political visits between the two NATO allies.

“From now on we are revising our relations with France,” he added. “There was no genocide committed in our history. We do not accept this.”

Under the draft law, people can be jailed for a year and fined 45,000 euros for denying that the killings of hundreds of thousands of Armenians by Ottoman Turk forces during World War I amounted to genocide.

In retaliation, Turkey’s premier said the country would rule on a case-by-case basis on any French request to use Turkish airspace or military bases and would turn away French military vessels from Turkish ports.

Turkey would also boycott an economic committee meeting in Paris in January, Erdogan said ? a move that will worry business leaders in both countries fearful for the fate of 12 billion euros ($16 billion) in annual trade.

“Turkey is an ally of France and a strategic partner,” Juppe said, citing work done by the states in NATO and the G20 to address the crisis in Syria, bring peace to Afghanistan and develop security in the Mediterranean.

“What I wish is that our Turkish friends will not overreact to this decision by the French National Assembly (parliament).”

Supporters say the draft law, which will now be debated by the Senate and parliamentary committees and may be enacted early next year, is an overdue measure to ensure one of the 20th century’s worst massacres is not forgotten.

But Turkey argues that Armenia’s estimate of 1.5 million dead is exaggerated. It puts the death toll at about 500,000 and denies the genocide label ? ascribing the deaths to fighting and starvation during World War I and accusing the Armenians of siding with Russian invaders.

The United States urged France and Turkey ? both NATO members ? to de-escalate the row.

“We obviously want to see good relations between France and Turkey, we hope they can resolve differences between them, they’re both stalwart NATO allies and partners,” a U.S. senior diplomat said on condition of anonymity.

Erdogan accused France’s President Nicolas Sarkozy of pandering to domestic voters, and warned of an escalating scale of Turkish sanctions against France.

“History and people will never forgive those exploiting historical facts to achieve political ends,” he said.

Sarkozy’s government insists the law was a parliamentary idea, but it was drafted by members of his UMP party and was passed in the first of a series of votes by a small number of lawmakers in a sparsely attended house.

The move was also criticized at home, with socialist presidential candidate Francois Hollande denouncing it as “an electoral operation” and former justice minister Robert Badinter deeming it “unconstitutional.”

Angry crowds in Ankara chanted: “We have not committed genocide, we defended the homeland. Wait for us France, we will come.”

Armenia’s Foreign Minister Edward Nalbandian, however, expressed his gratitude to France, which he said had “once again proved its commitment to universal human values.”

France is home to around 500,000 citizens of Armenian descent and they are seen as a key source of support for Sarkozy and the UMP ahead of presidential and legislative elections in April and June next year.

Franco-Turkish relations are often tense ? Sarkozy is a firm opponent of allowing Turkey to join the European Union ? but 1,000 French firms work there.

Much of Europe, including France, is facing recession amid a sovereign debt crisis, but Turkey enjoys growth rates in excess of eight percent and, with 78 million people, it is a huge potential market.