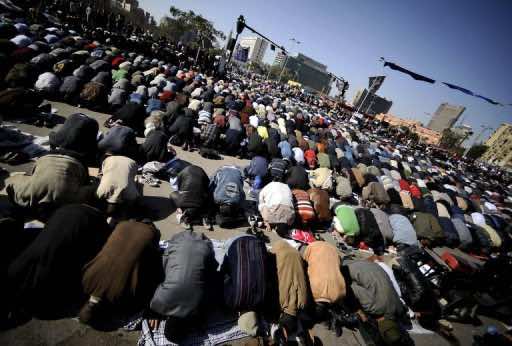 Supporters of the military, which took power after an uprising ousted veteran president Hosni Mubarak in February, held a counter-rally in the Abbasiya neighborhood, several kilometres (a few miles) away.

Egypt has been divided by the clashes between anti-military protesters and soldiers that have left at least 60 people dead over the past two months and overshadowed the first elections since Mubarak’s downfall.

“Women are a red line!” some protesters shouted in Tahrir Square as others chanted against Field Marshal Hussein Tantawi, the head of the ruling Supreme Council of the Armed Forces and Mubarak’s longtime defense minister.

Sheikh Hisham Attiya, the imam leading the Muslim noon prayers in the square, called for an independent panel to investigate the deaths and prosecute those responsible.

The clashes have piled pressure on the SCAF, with both liberals and Islamists facing off in Egypt’s first post-revolt elections condemning its handling of the transition.

“The military council is an extension of the old regime; it has the same mentality and uses the same tactics,” said protester Mohammed Farrag, 31.

Police abuse was a driving force behind the popular uprising that ousted Mubarak.

The SCAF denies ordering the use of force against protesters but has apologized to the women of Egypt for “any transgressions” after several shocking videos have surfaced showing brutality against protesters, but it is the beating of women that caused has enraged people.

“If they think beating women up is going to silence the protesters, they are wrong,” said one woman, Mona Ahmed.

Videos posted on social networking sites over the past week show soldiers savagely beating women with truncheons or throwing them to the ground.

In one instance, which drew worldwide attention, a veiled woman was thrown down, her top ripped away to expose her bra and a soldier kicked her in the chest.

The beatings sparked a backlash, with thousands of women marching through Tahrir Square on Tuesday in protest against the military junta.

London-based watchdog Amnesty International called on the SCAF to uphold the right to peaceful demonstration.

“The shockingly violent scenes of recent days must not be repeated,” said Philip Luther, Amnesty International’s interim director for the Middle East and North Africa.

“Egypt’s military authorities must ensure protesters are allowed to exercise their right to freedom of expression peacefully, without fear of attack. The authorities are responsible for the safety of those protesting,” he said.

The UN women’s agency on Thursday expressed “great concern” over the recent attacks on women, which US Secretary of State Hillary Cliton denounced as a “disgrace.”

Meanwhile, thousands gathered in the Abbasiya neighbourhood under large banners bearing the pictures of the ruling military generals.

Waving Egyptian flags, the pro-military protesters demanded “the downfall of Tahrir” and insisted “the people and the army are one.”

The rallies come as counting is underway after run-offs for the second phase of a staggered election for the lower house of parliament.

The country’s two largest Islamist parties have emerged as front-runners so far.

The Muslim Brotherhood, whose political arm is leading in the parliamentary polls, refused to back Friday’s protests.

The generals have pledged action against those responsible in an unusually contrite statement.

But they also warned against joining protests they said were aimed at toppling the state, and refused to move foward presidential elections from mid-2012.