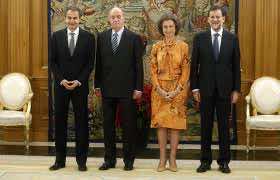 Morocco is firmly determined to reinforce the special partnership with Spain in geostrategic, political, economic cultural and social areas, King Mohammed VI said in a message to Mariano Rajoy on the occasion of his inauguration as prime minister.

The message emphasized the importance of the effective action of the institutions of the two neighbourly countries and their stakeholders to serve their respective interests and common aspirations, in such a way as to consolidate this exemplary partnership as a means to achieve common development in the Maghreb, Euro-Mediterranean and African spaces.

King, Mohammed VI who wished Rajoy success in his mission, reiterated deep appreciation for the long-standing civilizational and cultural heritage shared by the two countries, as well as for their strategic partnership based on solid friendship, good neighbourliness, mutual esteem, fruitful cooperation, constant consultations, friendly understanding and attachment to lofty universal values of democracy, respect for dignity, human rights and common development.