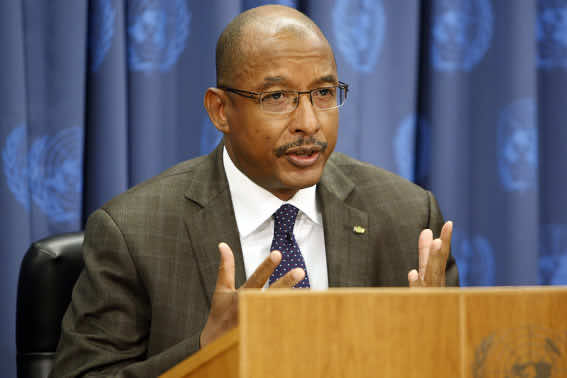 In July 2001, African leaders adopted the New Partnership for Africa’s Development (NEPAD), the road map for the continent’s development. Since its adoption a decade ago, how much has the plan achieved? In a frank, plain-talking interview, Ibrahim Assane Mayaki, CEO of the NEPAD, says a lot has been achieved, contrary to what most western media claim.

Africa Renewal Ten years after the adoption of the New Partnership for Africa’s Development (NEPAD), what is your assessment of it?

Ibrahim Assane Mayaki There are three major ways in which NEPAD may be assessed. First, NEPAD is the only development initiative available on an African scale. It has been with us for the past 10 years, yielding conclusive results in areas such as science, technology, agriculture and infrastructure. The initiative has just been relaunched with its recent integration as a development agency in the structure African Union. I am not aware of any other African initiative that has lasted this long and relied on a formal, institutionalized framework such as this one, with a mandate focusing on issues of implementation.

My second point is that NEPAD is directly responsible, from the start, for some of the most important development strategies implemented in key areas such as agriculture, with CAADP [Comprehensive Africa Agriculture Development Programme], or infrastructure, with PIDA [Programme for Infrastructure Development in Africa], areas that are also deemed to be of the utmost priority. The fact that all African countries strive to implement the rules and norms of both strategies at the level of our continent is a great achievement.

My third point, little known though eyed with envy by Europe as well as other regions, has to do with the African Peer Review Mechanism. This original and unique approach is about evaluating political or economic governance in countries that are willing to be assessed.

AR Still, there are many people, particularly in Africa, who wonder what NEPAD is and what use it is?

IAM The problem is that many Africans spend too much of their time repeating what the Western media says about the continent and about us. It will take some time to ward off this colonial way of thinking. Obviously, when you watch the way Africa is treated on a major news channel like CNN, the feeling is that Africa is plagued by misery and ruled by inept and corrupt leaders who hardly give any thought to the greater public interest. Many among us Africans tend to repeat what CNN and others have to say without taking a step back and reflecting about what we just heard. We seem to wallow in a kind of self-disparagement. Nowhere else is such an attitude so widespread than on our continent.

Unfortunately, this self-disparaging attitude does have a negative impact. We cannot afford to keep on offering our children a negative image of Africa. We need to put things into perspective. A country like Rwanda has made significant progress while reducing its reliance on foreign aid. By mobilizing its own resources, Cape Verde has succeeded in becoming a middle-income country. Judging from the design and implementation of its new constitution, Kenya is now making significant progress in terms of governance. Botswana refuses to appeal for foreign aid, with many other countries following its example.

AR But to return to NEPAD, the plan remains an abstraction for many ordinary Africans. Why?

IAM NEPAD remains an abstraction because people do not know what it’s achieved, since NEPAD’s achievements were not communicated. This has to do with the wider issue of public information about Africa.

If you look at one of our most recent publications reviewing NEPAD’s achievements over the last 10 years, you will note that we succeeded in the many areas I mentioned earlier, and on many other issues as well. All this is little known. We need to develop strategies to increase the awareness of our achievements in the public. It is a major challenge.

AR Let’s speak in practical terms about two challenges that Africa is facing at the moment: famine in the Horn of Africa, and the lack of political change, which has at times resulted in revolution, as in North Africa. What does NEPAD have to offer to face up to these challenges?

IAM First on the issue of political change and democratization let me say one thing: the number of countries organizing democratic elections in Africa rose sharply in the last 15 years. Also, across the continent, there are only seven countries facing very serious governance issues, out of a total of 54. But all we hear about is those seven countries with problems, not the 40 or so other countries that are better rather than worse off.

About the famine threatening the Horn of Africa and the question of food security across the continent, let us not forget that most of our countries have seen their population multiplied five times in the past 50 years. Most countries succeeded in reaching levels of agricultural production that were unheard of 20 years ago. Obviously famine is an issue, but if you look at the 54 countries of Africa, less than a dozen countries are actually concerned by the problem.

More important still, in the last five or six years, investments in the agricultural sector are on the rise. There is still a long way to go at the political level, or in terms of resources and the way these resources are shared, or as to how producers may take part in the definition and implementation of policies. But we’re on the right track.

AR Upon hearing such arguments, many would be tempted to say that you’re overly optimistic. How do you respond?

IAM I am mainly realistic. I am trying not to overdo it, but my feeling is, quite simply, that when it comes to African issues, people tend to shun the more realistic approach because of the vision of Africa that is continuously being forced down our throats.

Africa has two major advantages: it possesses the most important pool of natural resources and has the youngest population in the world. It is the continent of the future. And if we do not want Africa to play its role, the trick is to instill in the elites the idea that they are incompetent, corrupt and responsible for all the misery around. This is certainly not true.