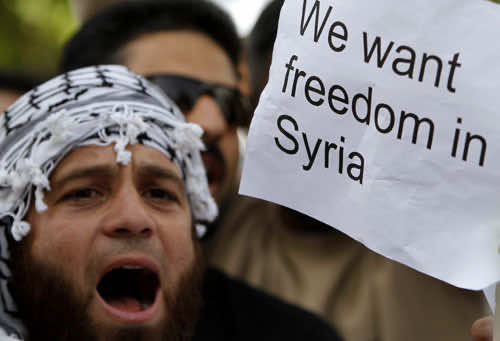 As Syrian authorities continue their bloody crackdown on anti-government demonstrators, more and more refugees are heading to the border with Jordan, where they hope to find safety.

The Jaber border crossing, about 90 kilometers (56 miles) north of the Jordanian capital of Amman, was once a busy place, marked by lines of cars that stretched for kilometers. Jordanians often used to cross here during the three-hour trip to Syria’s capital Damascus, a popular destination. They frequently made the trip to visit loved ones or shop, taking advantage of Syria’s lower prices.

But for the past nine months that border, once filled with people on weekend trips, has become a nearly deserted place, marked by one prevailing emotion: unease. Taxi drivers wait in vain for customers; the many small cafés are empty.

Bored and frustrated border officials are thankful for any kind of distraction, although they insist that visitors put their cameras away. They are frightened of the long arm of Syria’s military and often signal that danger is ever present by putting their hands around their necks.

“Refugees don’t come through here, rather they go through the forest,” said one border official. “We let them through, of course, since they need protection.”

He recommends going to the Ramtha border crossing, where life is a little easier for both traders and refugees.

Ramtha is a small, lively town, filled with produce stands, snack bars and shops carrying household goods. But there is also an eerie quiet here now and customers seem to have disappeared. Smuggling, long practiced in the region, is still going on, but is limited now and very much undercover.

Cars wait at the border, groaning under the weight of their goods. Roof racks are piled with vegetables and fruit; car trunks overflow with sweets.

Border agents on both sides often turn a blind eye to the comings and goings here. Goods have been transported across this point illegally for as long as anyone can remember. Almost everything is cheaper in Syria and therefore highly sought after in Jordan.

The area has also become a center for refugees from Syria as more and more people flee the heavy hand of Syrian security forces, who have been engaged in a bloody crackdown against the pro-democracy movement that has built up there.

The first wave of refugees came from Dera, a town only three kilometers from the border and where the resistance movement against Syrian leader Bashar al-Assad began in March.
Now Ramtha is seeing the arrival of entire families from all of northern Syria who are fleeing the crackdown. Three families have just arrived from Jisr al-Shorour, close to the Turkish border, where they have found shelter with relatives. Eighteen people are living in a four-room apartment.

“When we tried to bury three neighbors, the Syrian army began firing at us. People were killed and that’s why we’re here in Ramtha,” said Abu Achmed, who says despite the circumstances, he feels some relief since he has found work in Ramtha in construction.

But his sister Mariam has a nervous expression on her face. She is worried about her relatives still in Syria and tells the story of a cousin who fled to Turkey, but then returned. He was immediately arrested by security forces and tortured.

“After that, he stopped talking,” she said.

Another relative, Mustafa, talks about a strike that took place, but which resulted in a brutal reprisal by security forces, who smashed up small shops and even private apartments.

“Soldiers were everywhere and after 3:30 in the afternoon, no one dared go out on the streets,” he said. “Almost three-quarters of the Sunni residents fled.”

These are not their real names, since they are too frightened to reveal their identities or to have their pictures taken.

“There will come a time when we are able to live in freedom,” said Abu Achmed, expressing his hopes over a cup of coffee. “But only when Assad is no longer in power.”

He would like to return with his family, to his home and his work. But he is thankful that his children are able to go to school in Ramtha and live more peaceful lives than they could in Syria.

“They were so afraid they couldn’t sleep,” he said. “We hope we can provide at least moral support to the rebels from here.”

But he doesn’t think much of an armed resistance: “We shouldn’t answer violence with violence.”

Little comfort, but at least safety

Umm Moussam is a 51-year-old widow who lives with her family of nine in two austere rooms and a kitchen in the small town of Mafraq, 13 kilometers from the Syrian border.

The house is really just a shell and its furniture consists of a half dozen mattresses. Moussam, who also insists that visitors put their cameras away, relates frightening stories from her hometown of Homs.

“They sealed off our neighborhood,” she said. “There wasn’t any food left, only shooting. We were being collectively punished and they cut off our water and electricity.”

One son and a daughter are still there and they telephone each other when they can. Often, the Syrian authorities shut down Internet connections, making communication even more difficult.

One of her sons, who had recently left the army, has since fled Homs and describes his time in the armed forces as pure terror.

“We simply fired our guns into the air because our superiors would often check to see that we had fired our weapons,” he says. “Many of my fellow soldiers had no idea what they were supposed to do. We got no information from the army, only that everybody out there was a terrorist.”

For his mother, the most important thing is now is press freedom, and she, like Abu Achmed, does not think violence will bring down the Assad regime.

“We want the world to learn more about our fate,” she says, and hopes she will soon be able to return to Homs. But, she adds, she would rather live for a year in refugee housing as spend another decade or more under the Syrian leader’s rule.