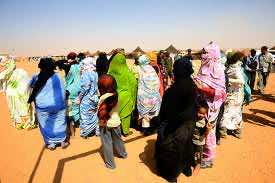 Under this programme, members of Sahrawi families living in the Moroccan southern provinces visit their relatives in the Tindouf camps in south-western Algeria, and vice-versa.

Sixty five people from 10 families were included in the new operation, said a statement of the Moroccan coordination office with the MINURSO.

Therefore, 35 people belonging to 5 families from the Laayoune province (Morocco’s south) embarked Friday morning aboard a UN aircraft at the city’s airport bounding for Tindouf, before 30 people from five families landed on the same plane from the Tindouf camps, added the same source.

The operation took place in good conditions and necessary steps have been taken to ensure a warm welcome to the participants in this operation, the statement said.

The new exchange brings the number of people who benefit from the UNHCR-facilitated family visit exchange programme, since its launch in March 2004, to 12243, including 5878 people from the southern provinces and 6365 people from the Tindouf camps.