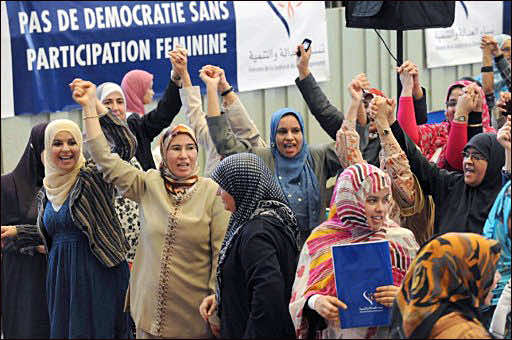 Morocco’s PJD may serve as a model for similar Islamist electoral victories in the region, economic and political experts suggest.

From Ennahda in Tunisia, to Egypt’s Muslim Brotherhood, to the Justice and Development Party (PJD) in Morocco, the Arab Spring brought an Islamist party sweep.

But Moroccans say their recent election is different; there is nothing to fear from the PJD win.

“There are those who reject the current regime, such as Al Adl Wal Ihssane, and then there are others – most notably the Takfirist Salafists – who reject the whole process of democracy itself,” Moroccan political analyst Mohamed Darif explains.

“But for many years, the PJD has been keen to work with existing political institutions,” he says.

Now that the Islamists have taken power in Morocco, everyone is waiting to see if the PJD will deliver on its campaign pledges.

“The other parties, such as Istiqlal or the USFP… made us lots of promises that none of them ever kept, even in part,” PJD supporter Youssef Koufi, a sales representative for a car hire agency, tells Magharebia.

“With the new constitution, we are hoping that the PJD will be able to implement the democratic choices that it stands for,” he adds.

The party of Abdelilah Benkirane is not expected to launch any dramatic changes, especially since it has been forced to form a coalition with other political parties to make a governmental majority, explains Dr Nouh El Harmouzi, editor of the Arabic-language website Minbaralhurriyya.

“The PJD has stated that there will be continuity of social, political and economic policies,” he says.

“The accession to power of Islamists who present themselves as moderates won’t have any negative effect on Morocco’s relations with other nations,” Harmouzi adds.

Will the PJD introduce an Islamist system based on repressive models seen in some other nations?

The answer is an emphatic “no”, says Hicham El Moussaoui, an economist at Sultan Moulay Slimane University in Béni-Mellal and an analyst for UnMondeLibre.org, a global network to advance liberty.

“One would be more likely to see a recreation of the Turkish model than the Iranian model in Morocco,” he says. “The PJD has never missed an opportunity to praise the merits of that model.”

As for the party’s ideology, the economist finds them “more flexible than the Al Adl Wal Ihsane Islamists and more pragmatic”.

“In Morocco, no-one can claim a monopoly on religion. This ensures there is a certain stability and balance, particularly because of the king’s role as arbiter,” he adds.

The PJD Islamists will be unable to transform the Alaouite monarchy into a theocracy, Moussaoui asserts.

“First, the King still has broad powers, which enable him to play a role as supreme arbiter, and could even remove the PJD from power if there were an attempt at Islamisation,” the internationally acclaimed economist says.

“The monarch has chosen the lesser of two evils by promoting the PJD, because for him they represent the best defence against the radical Jihadist Salafists.”

The PJD also want to hold onto the monarchy, knowing full well that it is a federating institution and absolutely essential for political stability in the country, Moussaoui says.

“Lastly, they have been part of the country’s institutions and political scene since 1997. Having learned lessons from the FIS Islamists and the Brotherhood in Egypt, the PJD is now more aware of the constraints involved in the exercise of power.”

So who voted for the Islamist party?

“This was a protest vote,” Moussaoui says. “The problems of unemployment, poverty, corruption and social inequality exasperated Moroccans in the end. Voters lost confidence in the political parties which, in their eyes, represent the chief culprits in the country’s underdevelopment.” And for many Moroccan voters, he says, the PJD represented the least corrupt alternative.

The Islamist party also managed to build up a solid support base, thanks to its social and charitable work.

“By moving into social territory neglected by the state, they managed to build up a reservoir of people prepared to offer unwavering support. That social partnership strategy has already proven its worth in other countries, whether in Palestine with Hamas, or in Tunisia with Ennahda,” Moussaoui says.

And those citizens, especially the poor, who felt abandoned by the state and were grateful for the PJD charity aid, became avid party supporters.

“All the people traditionally on the margins of Moroccan society saw their own experiences reflected in the PJD’s message,” Moussaoui says.

Khadija Massdoum works at a clothing factory. She voted for the Islamist party based on just one of their platform pledges.

“I’m not educated and I didn’t read up on the different parties. But I chose the PJD because they promised to raise the minimum wage to 3,000 dirhams. I know that the members of this party keep their promises. I know this from experience, having seen the charitable work they do in our area,” she tells Magharebia.

Along with the promise to raise the minimum wage, the Justice and Development Party platform included pledges to reduce unemployment by 2%, provide grants for unemployed young people and introduce a jobseekers’ allowance.

It was not just the poor classes that swept the PJD into power. Middle class voters also wanted change, particularly an end to corruption, Massaoui says.

“They’re the only party that I think is capable of establishing the basis for good governance and cleaning up morals in public life,” Casablanca teacher Khalid Taoufiq tells Magharebia. “All of their candidates are people who can contribute a great deal to politics.”

Even voters who supported other parties appear willing to give the PJD a chance.

“I’ve always been a leftist, so I voted for the USFP,” banker Mahmoudi Issam says, adding that he “doesn’t share many ideas with the PJD”.

Still, he says, “This is an opportunity to put it to the test and see how it will implement its promising manifesto.”