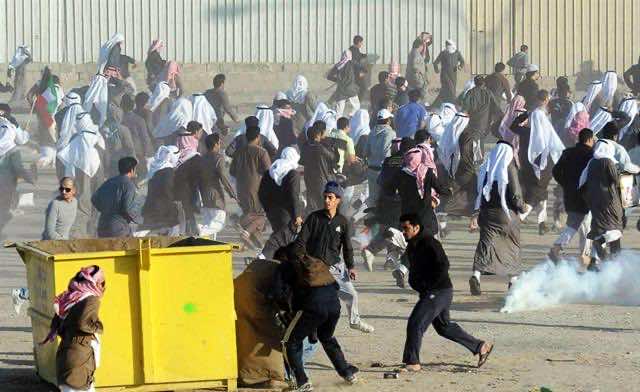 Hundreds of stateless Arabs living in Kuwait demonstrated for the second week in a row demanding citizenship and other rights, an AFP journalist said.

Kuwaiti activists, former MPs and representatives from the Kuwait Association for Human Rights attended the rally in Jahra, northwest of Kuwait City, as police watched without interfering.

The rally comes two days after Kuwait said it may grant citizenship to 34,000 out of the estimated 105,000 stateless people living in the country, and urged the remaining 71,000 to reveal their original nationality.

The stateless, known locally as bidoons, claim the right to Kuwaiti nationality, saying that their ancestors failed to register for citizenship when the government began registration five decades ago.

Kuwait has long said that bidoons or their forefathers destroyed their original passports to claim the right to Kuwaiti citizenship in order to gain access to the services and generous benefits provided to its citizens.

In a bid to force them to produce their original nationality papers, Kuwait has denied them essential documentation, including birth, marriage and death certificates, according to a report in June by Human Rights Watch.

Because of stringent government restrictions, a majority of them are living in dire economic conditions in oil-rich Kuwait, where the average monthly salary of native citizens is more than $3,500 (2,575 euros).

Fifty-two stateless who were arrested following protests in February and March are currently on trial for illegal assembly and assaulting police.