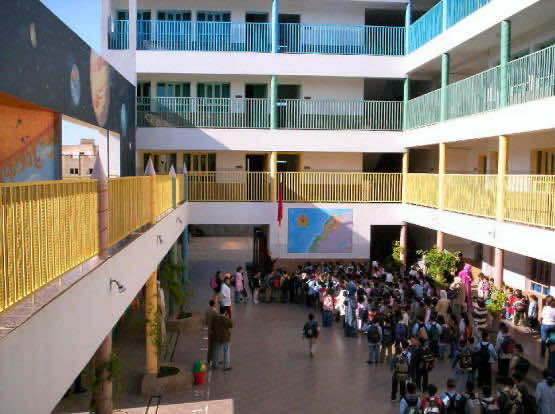 It was a twenty meter-square cold dull room, with some old Moroccan-made couches, “Sdader”, and some mangy pillows scattered here and there. At the corner of this space, one could see a wooden counter, where behind it stood a middle aged woman who’s in charge of brewing tea for the teachers during break times. Three sets of Moroccan tea pots are laid out before the lady with bunches of drinking glasses; the big sized tea pot is prepared with absinth, the medium with mint and the smallest is without sugar, as many teachers are diabetic. The three pots are ironically lined up like horses in a parade with their spouts, like rifles, pointed out towards the leaking ceiling of the room! There is also an old rectangular wooden table with four robust legs which is used for many purposes; sometimes as a desk for teachers to fill in a form, and at other times as a small ‘mail box’ where most of our mandatory bank letters are deposited.

On the well polished domes of the tea pots, one could see the reflection of what’s going on in the room. It was 4 P.M and teachers were coming in slowly, and short of energy. They sat down carefully on the couches. Each one was holding a glass of tea between his or her hands trying to get warm, as it was a freezing day. I felt sorry that our room lacked the heat needed for cold days. Some were nibbling a two-Dirham muffin – like toothless babies – trying to gain some slight energy for the coming teaching hours. They were sipping the magic drink in an awkward silence. Only the voices of the dried lips, which hardly touched the brims of the tea glasses, could be heard, but the tea would stop the shivering action, declaring the end of a prestigious moment.

The air in the room was quite melancholic. Teachers were wearing white blazers – almost like pallbearers – with clouds of chalk patches, holding old frazzled satchels that came in black and brown colors with faded shades. The whole scene gave one the impression of a mourning assembly. Words were scarce; teachers only exchanged exhausted looks, frowns, and hand waving….body language!

The room is a non-smoking area. There is, however, an open-air space reserved to smokers outside. Inside, few teachers would dare chat and talk about the ebbs and flows of this warrior-like job, teaching. They try to minimize efforts and save energy for the coming barking hours. In return, they get only insults, are ridiculed and are called names and nicknames by the end of the day. They are trying hard to say something to the young men and women of this nation, mold their future and usher them into a brighter life. Teach them or preach, it’s all the same, though; chalk and talk approaches control the creative hands and minds of these metamorphosed body creatures we dare call teachers!

Their faces are wearing the fixity of thoughtful men; unmerciful time has chiseled octogenarian faces on their tiny figures. One could see them blind, bald or grey haired. They wear shabby clothes that lack the brightness and glamour called for in business nowadays, mostly khaki or black coats, black pants and plaid shirts, polished shoes, and black Casio watches. Their voices are getting coarse after many years of talking with no rewards and no retreats, only plans and schemes, hopes and promises that one day our wretched situation will change; one day we’ll have white boards that would enlighten our dark teaching history, one day we’ll have fifteen well mannered students with single seats. One day we will have offices where students contact us when they need help. One day we’ll have high salaries and low debts, enough money to be able to change our rusty bicycles into motorcycles, clunkers into cars, in order to be able to move from shacks to houses, from the suburbs to the city, from darkness to light. One day we will be able to break the unmerciful unknowledgeable fingers which point at us, mouths weaving jokes about our daily lessons, and brains belittling us to things and to victims while we are supposed to be the elites of this ill society.

We are agents of change or should I say prophets – our early historical label. We are turned out to be a “piece of drifting wood”, to quote Ernest J .Gaines. We live unseen; die unseen, and unheard as well. While we are supposed to be the town’s real celebrities, the one thousand dollar faces, brave hearts, men and women… It’s a pity that we are becoming so little in everybody’s eyes, as if the earth is turning upside down and our mission is nothing sublime, but to show off our knowledge then disappear in the darkness of years, decades and months.

The old school bell rang again at 4:05 P.M then I had to go embrace my opaque destiny, wear my six pairs of hands and three pair of eyes, and open the doors of my predicament trying to lock doors of the students’ jail: mental, physical or emotional. Graffiti on the wall in front of me added insults to injury and summed the whole scene up; Death to you, TEACHER!