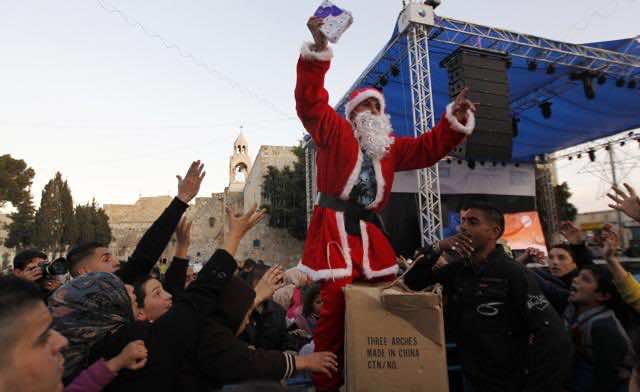 Christians began flocking to Bethlehemearly on Saturday to celebrate Christmas following a tumultuous year of political upheaval and change across the Arab world.

As day broke on this not-so-little-town which lies just a few miles south of Jerusalem, locals began gearing up to welcome thousands of pilgrims who come to see the spot where biblical tradition says Jesus was born to a young couple visiting from Nazareth.

Saturday’s events were to be focused on Manger Square, the plaza in the town center which was to host a traditional Christmas procession at midday followed by concerts and other entertainment on what is the biggest tourist attraction of the year in the Palestinian territories.

A huge Christmas tree covered in lights and glittering decorations dominated the center of the square which was already filling up with excited visitors, some wearing red Santa hats, others in the somber garb of various monastic orders.

Singing filled the square as pilgrims belted out carols in Arabic, and street vendors were doing a brisk trade in cakes, sweets and hot air balloons.

The celebrations were to continue into the night and culminate with a celebration of the Midnight Mass by Latin Patriarch Fuad Twal, the most senior Catholic bishop in the Middle East.

He is expected to deliver a message of hope for peace in the Middle East and around the world, which was also expected to touch on the revolutions sweeping the Arab world.

Bethlehem’s Manger Square is the location of the Church of the Nativity which was built on the site where Christians believe Mary gave birth to Jesus in a cattle shed, and laid him in an animal’s feeding trough, also known as a manger.

Bethlehem attracts hundreds of thousands of pilgrims each year and is the main tourist attraction in the Palestinian territories.