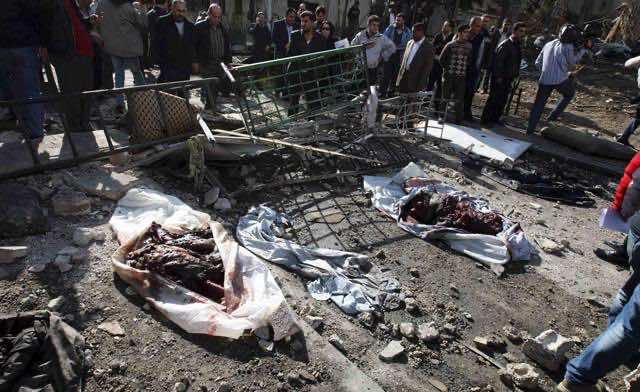 Arab League monitors are to meet Syria’s top diplomat Saturday, a day after suicide bombers killed 44 people in attacks Damascus blamed on al-Qaeda but the opposition claimed were the work of the regime.

The attacks, the first against the powerful security services in the heart of the capital since an uprising against President Bashar al-Assad began in March, came a day after the arrival of an advance group of monitors.

They are in the country to pave the way for the arrival of a team of Arab League observers tasked with overseeing an end to the bloodshed, and will hold talks with Foreign Minister Walid Muallem Saturday.

“Forty-four people, civilians and security forces, were killed and 166 others injured in the two terrorist operations,” the interior ministry said Friday.

A statement on state television said “the hands of al-Qaeda were behind” the attacks.

Witnesses said a bomber tried to ram a vehicle packed with explosives into the compound of the General Security Directorate, Syria’s most important plain-clothes security service, in Damascus.

A second blew up a vehicle outside a nearby military intelligence building.

Television showed a huge crater at one of the bomb sites and pools of blood on surrounding pavements.

Bystanders were seen carrying away charred and mangled bodies wrapped in makeshift shrouds.

“On the first day after the arrival of the Arab observers, this is the gift we get from the terrorists and al-Qaeda, but we are going to do all we can to facilitate the Arab League mission,” Deputy Foreign Minister Faisal Meqdad told reporters at one of the bomb sites.

Asked to comment on suggestions that the bombings had been engineered by the regime itself, Meqdad shot back: “Anyone who makes such allegations is a criminal.”

But the Syrian National Council opposition group claimed in a statement that: “The Syrian regime, alone, bears all the direct responsibility for the two terrorist explosions.”

The regime wanted to create the impression “that it faces danger coming from abroad and not a popular revolution demanding freedom and dignity,” it added.

The U.N. Security Council condemned the attacks but remained deadlocked on a full resolution on the crisis with the Russian and U.S. ambassadors trading personal barbs.

While not rejecting Syria’s account of the events, France accused the regime of trying “to mask the reality of the repression, notably by transferring political prisoners to secret jails”.

He also said it was crucial the attacks “not impede the critical work of the Arab League monitoring mission.”

Ban Ki-moon’s spokesman said the U.N. leader was “gravely concerned” about the escalation and urged the government to “fully and speedily” implement the Arab League peace plan, while Britain’s foreign ministry condemned the attacks and “the loss of life and injury.”

Syria’s deputy foreign minister was accompanied to one of the bombing sites by Arab League Assistant Secretary General Samir Seif al-Yazal, head of the advance team which arrived Thursday.

“What has happened is regrettable but the important thing is that everyone stay calm,” Yazal told reporters.

“We are going to press on with our work. We have started today, and tomorrow (Saturday) we will meet Walid Muallem.”

Yazal’s nine-member team is making logistical arrangements for the arrival of the first observers, who will eventually number between 150 and 200.

The mission is part of an Arab plan endorsed by Syria on November 2 that also calls for the withdrawal of the military from towns and residential districts, a halt to violence against civilians and the release of detainees.

Muallem has said he expects the Arab observers to vindicate his government’s contention that the unrest is the work of “armed terrorists,” not overwhelmingly peaceful protesters as maintained by Western governments and human rights watchdogs.

Syria says more than 2,000 security force personnel have been killed in attacks by armed rebels since March.

But opposition leaders have charged that Syria’s agreement to the mission after weeks of prevarication was a mere “ploy” to head off a threat by the Arab League to go to the U.N. Security Council over a crackdown, which the world body says has left more than 5,000 people dead since March.

There was no let-up in the bloodshed on Friday with human rights activists reporting at least 14 civilians killed by security force fire.

Canada announced Friday the freezing of assets of more Syrians loyal to the president and a beefed-up trade ban.

“Canada will continue to put the squeeze on the Assad regime,” Foreign Minister John Baird said.

“We will not sit idly by, not while Assad and his thugs continue to violate the rights of the Syrian people.