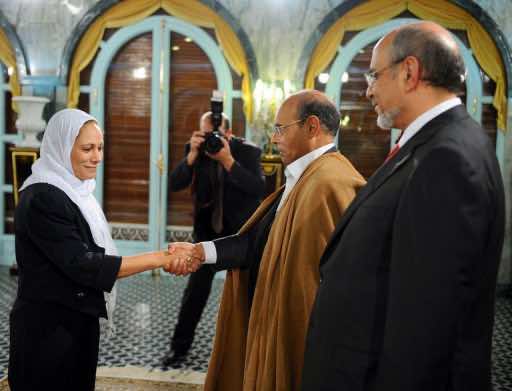 Tunisia’s new government was sworn in on Saturday by the country’s president, who told the ministers to get straight down to work.

Headed by Prime Minister Hamadi Jebali of the moderate Islamist Ennahda party, the 30 ministers and 11 more junior secretaries of state took the oath at the presidential palace in Carthage before head of state Moncef Marzouki.

The line-up was approved Friday by the country’s constituent assembly in a confidence vote with 154 in favor, 38 opposed and 11 abstaining, after a full day’s debate.

The 41-member cabinet was the subject of weeks of negotiations between Ennahda and its two left-leaning allies.

Ennahda, which came first in the elections for the assembly in October, has kept the key interior, foreign affairs and justice ministries among others.

The creation of a new government is a major milestone for Tunisia following the popular revolt which ousted president Zine el Abidine Ben Ali, who had been in power for 23 years, in January.

It triggered what became known as the Arab Spring — uprisings across the region that also led to the overthrow of veteran dictators in Libya and Egypt.

Jebali on Thursday vowed to make job creation and reparations to victims of the ousted regime among his key priorities.

Tunisia is in the midst of an economic crisis, with unemployment running at 20 percent while economic growth is expected to be a sluggish 0.5 percent for 2011.

Marzouki warned Friday that the north African country’s post-revolution economic and social fabric was still fragile, and that strikes and protests could lead to “collective suicide”.