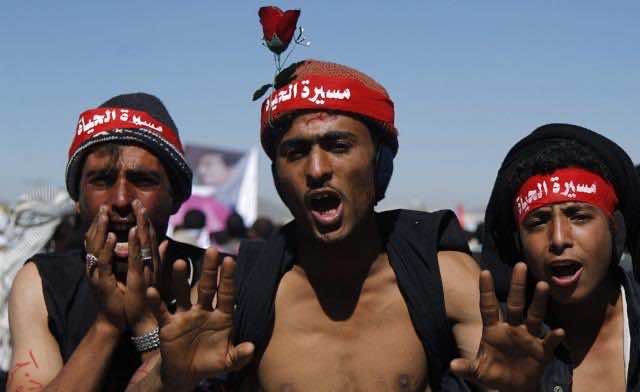 The death toll from an attack by security forces and loyalists to President Ali Abdullah Saleh against a march of thousands calling for the embattled leader’s trial, has risen to 13 medics told AFP.

“Thirteen people were killed and 50 others were wounded by live rounds,” a medical official said Sunday, updating an earlier toll of nine dead.

A day earlier, forces loyal to Yemeni President Ali Abdullah Saleh opened fire to stop tens of thousands of protesters approaching his compound in the capital Sana’a on Saturday.

In Sana’a, shots rang out as the activists entered the city chanting “No to immunity.” at the climax of a mass march that started days earlier in the city of Taiz 200 km (125 mile) to the south, said residents.

The protesters were referring to a deal granting Saleh immunity from prosecution for his part in a violent crackdown on months of demonstrations against his 33-year rule.

Yemen’s embattled president, who is set to stand down in February, told reporters on Saturday that he is planning a stay in the United States in the coming days.

“I will travel to the United States in the coming days, not for treatment because I am well, but in order to create favourable conditions … for the presidential election” set for February 21, he told a news conference in Sana’a.

He said that after his U.S. trip ? without saying when this would be ? he would return to Yemen to resume his political activities in the opposition.

“I will lead political action in the heart of my party in the opposition,” he said of his General People’s Congress (GPC) party, which has shared the reins of power in a transition government of national unity since December 10.

Saleh, who has wounded in a June 3 explosion at his Sana’a palace and air lifted to hospital the next day in Saudi Arabia, needs “important” medical treatment abroad, Jamal Benomar, the U.N. envoy in Yemen, said on Wednesday.

The immunity agreement, crafted by Yemen’s wealthier neighbors in the Gulf Cooperation Council (GCC), was designed to ease Saleh out of power and avert civil war in a country that has seen a growing infiltration from al-Qaeda and sits next to key oil shipping lanes.

Under the deal, Saleh agreed to transfer his powers to his deputy. An interim government will prepare the country for an election to replace him in February, and has promised to separate pro-Saleh troops from militiamen loyal to tribal leaders and rebel army units in Sana’a and elsewhere.

If he goes, Saleh would be the fourth leader to surrender power after mass protests that have redrawn the political map in North African and the Middle East.

Protesters, many of them young, chanted “For shame, the blood of the martyrs has been sold for dollars,” referring to the immunity deal, which was endorsed by a coalition of opposition parties that are part of the interim government.

Witnesses said troops loyal to Saleh spread out across the entrances of streets leading to his compound to block any attempt by protesters to approach it.

Pro-Saleh troops also used tear gas to try to turn back protesters in the Sabaeen district of the capital, the witnesses said.

Later in the day, marchers retreated and headed towards Change Square, a rallying point for the protests which began in January, they added. Hundreds of people have died since protests broke out.

Tanks, troops and armoured vehicles were deployed around the presidential compound.

Protesters want to purge the government of members of Saleh’s family, who still hold key posts in the military and security forces.

Meanwhile, Yemen’s prime minister called on Saturday for the creation of an international fund to aid the impoverished nation whose economy is on the verge of collapse after nearly 11 months of unrest.

“The government is going to try to convince its brother countries and friends to create a special international fund for Yemen,” Prime Minister Mohammed Basindawa told parliament, according to the official Saba news agency.

Unveiling the plans of his unity cabinet that is tasked with managing Yemen for a two-year transition period, the prime minister said the special fund would aim to repair public services in the impoverished country, which is also battling an al-Qaeda-linked insurgency in the south.

Providing Yemenis with an adequate supply of oil, gas, water and electricity was one of the key priorities listed by the premier.

Basindawa also pledged to provide aid to the families of the “martyrs” who have been killed during the unrest and give financial assistance to the unemployed, without specifying how such initiatives would be financed.

The government, which expects to hold presidential elections on February 21, will also work “to restore security, good governance and fight corruption” in a “civil, democratic and modern state,” he said.

The prime minister promised to open a national dialogue on Yemen’s future that will include young protesters, some of whom have continued to demonstrate against an immunity deal handed to Saleh and his allies in exchange for his departure from power.

“The government will work with the international community to combat terrorism and organized crime,” Basindawa added, confirming Yemen’s alliance with the United States in its battle against Al-Qaeda.

Parliament is set to debate the prime minister’s proposals from Monday.

Last week, U.N. agencies said nearly four million Yemenis will be affected by the country’s political and economic crisis in 2012, more than half of whom will suffer from acute food shortages.