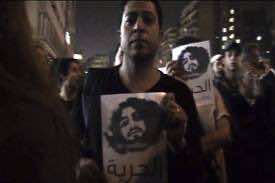 Egypt’s judiciary decided on Sunday to free blogger and activist Alaa Abdel Fattah, who has spent the past two months in custody, his sister said.

Mona Abdel Fattah announced on Twitter that a court had decided to “free Alaa,” who had been remanded in custody on October 30.

The blogger was accused of inciting violence during an October 9 demonstration by Coptic Christians in Cairo.

He also faces charges of vandalism during the demonstration which degenerated into clashes with security forces in which 25 people were killed, most of them Copts protesting over the burning of a church in the southern city of Aswan.

The young man reportedly refused to undergo questioning by the military prosecution on the grounds that the military itself was implicated in the case.

Coptic witnesses said they were fired upon by soldiers during a protest march and that several people were killed when armoured vehicles ran over and crushed them.

The army denies charges of having used excessive force and says three of its soldiers were shot dead, but it has also been criticised for putting civilians on trial in military courts.

In November, Amnesty International called on the Egyptian authorities to investigate human rights violations and to lift the emergency law, which has been expanded to cover even more offences under the military’s jurisdiction.

The watchdog said around 12,000 civilians had faced military courts in just nine months under military rule on charges including “thuggery” and “insulting the army.”