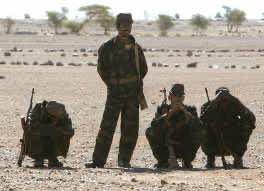 Malian authorities on Saturday turned back eight Polisario’s elements while they were trying to enter Mali, as they intended to carry out “dubious propaganda,” security sources said on Sunday.

“We turned back at the northern border with Niger eight young people” (of the Polisario). “There are laws to respect especially when it comes to carrying out a dubious propaganda,” said the same source, as quoted by AFP.
In mid-December, Bamako had accused elements of the Polisario of illegally penetrating its territory in order to kill a man and abduct several others suspected of participating in the abduction of three Europeans last October.

The three westerners (two Spaniards and an Italian) were kidnapped form the Rabouni camp near Tindouf (Algeria’s south-west).

A Malian Minister had recently said, however, the “reasons for this intrusion do not hold water. The person who was killed and those who were taken hostage have nothing to do with the kidnappers of European hostages taken in Tindouf.”

The official, who spoke on condition of anonymity, added that Bamako will “no longer accept the violation of its territorial integrity by the Polisario Front.”

Mauritanian security forces have lately arrested two individuals, members of Polisario, for their alleged links to this kidnapping.