New York - Almost four weeks after the appointment of Abdelilah Benkirane  as new head of government, Morocco’s public opinion will finally learn about the formation of the new government. 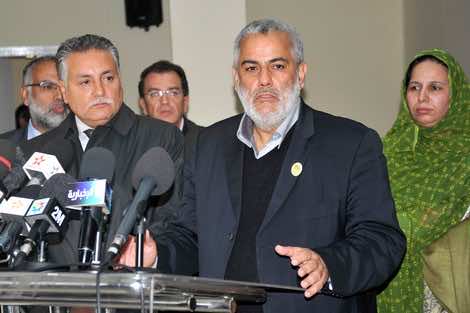 By
Adnane Bennis
-
Adnane Bennis is a national of Morocco, obtained his Bachelor’s Degree in Computer and Information Science from East west University in Chicago.
Dec 25, 2011
Spread the love

New York – Almost four weeks after the appointment of Abdelilah Benkirane  as new head of government, Morocco’s public opinion will finally learn about the formation of the new government.

The new Prime Minister-designate seems determined to keep his words when he told reporters on Saturday, before a meeting of his party’s committee, that the nature of ministerial portfolios to be attributed to each of the four parties of the governmental coalition would be unveiled “within one or two days.”

In its Monday issue, the Moroccan daily newspaper has revealed the names of Ministers from the Party of Justice and development.

According to Al Massae, the PJD will hold 12 portfolios, while the rest of the coalition parties will share the remaining portfolios.

Other sources contacted by Morocco World News’ correspondents in Morocco confirmed that the new government will include 27 ministers.

According to the same sources, the Popular Movement (PM) will be in charge of four ministries, namely, Ministry of Interior, Ministry of Energy and Minerals, Ministry of Modernization of Public Sector, the Ministry of Tourism.

The final structure of the new government will be officially released after King Mohamed VI approves Benkirane’s proposed nominees. It remains unclear whether the list of ministers submitted by Abdelilah Benkirane will be approved in its entirety by the monarch, as the latter, according to the constitution, has the power to veto the appointment of any nominees.

While most sources confirm that the new government is expected to be announced on Tuesday, it is not unclear whether the Istiqlal party will settle for the portfolios allocated to it. Sources close to the party’s leadership told Morocco World News that the party is unsatisfied with the nature of ministries it will be entrusted with, adding that the leaders of the Istiqlal did not spare any effort in order to keep the portfolio of Transport and Equipment under the umbrella of their party.