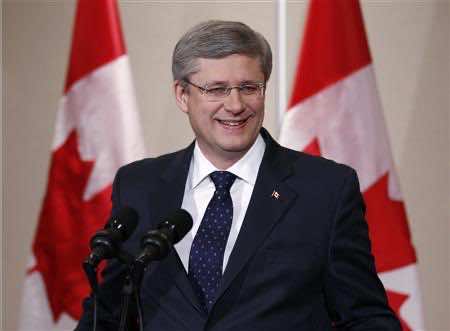 Canada is concerned that forces worse than deposed strongman Hosni Mubarak could rise to power in a newly democratic Egypt, Prime Minister Stephen Harper said in an interview.

“There are obviously forces who want democracy and progressive change (in Egypt), but there are clearly some forces that would want something that’s probably worse than what we had before,” he said in a taped interview with CTV News to be aired Monday.

“So we’ve always been a little bit hesitant on Egypt,” he said.

Harper was not specific about which forces concerned him.

But liberals have warned about the rise of groups that advocate a fundamentalist interpretation of Islam that could lead to a more conservative and overtly religious new parliament.

Liberals and Islamists have also united to condemn the military’s handling of the transition to democracy that lead deadly clashes.

Mubarak is currently facing a murder trial before an Egyptian court and may get the death sentence if found complicit in the killings of some 850 people who died during 18 days of protest that ousted him from power in February.

Harper said he has spoken to Israeli Prime Minister Benjamin Netanyahu about Israel’s security amid the sweeping changes shaping its ally and neighbor.

“I’ve spoken to Prime Minister Netanyahu and yes, we are concerned,” Harper said.

“The peace between Israel and Egypt for the past several decades has been of immense benefit to both countries and to the region. And anything that I think threatens that would not be good.”

The Canadian prime minister went on to say that the first free elections in Egypt held this year was a “pretty positive thing.”

“But at the same time, there’s been riots, there’s been persecution of minorities, in particular Coptic Christians and others, and this is a big concern,” he concluded.