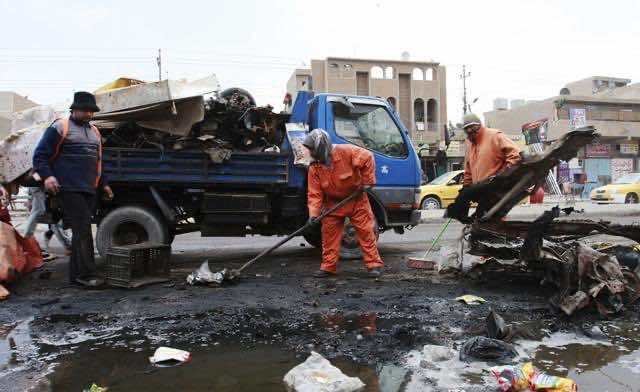 A suicide bomber in a car killed at least six people and wounded 31 more when he detonated explosives outside Iraq’s interior ministry in Baghdad, police and hospital sources said on Monday, as Washington called on Iraq’s feuding leaders to start a “dialogue” to avoid possible sectarian tensions.

The blast followed Thursday’s wave of explosions that killed at least 72 people in Baghdad in the first such attacks since a crisis erupted between Iraq’s Shiite-led government and Sunni rivals days after the withdrawal of the last U.S. troops, Reuters reported.

An interior ministry official, speaking on condition of anonymity, said the explosion was the work of a suicide car bomber. State broadcaster al-Iraqiya TV also reported this as the cause of the attack.

Iraq is mired in a political row with authorities calling for the arrest of Sunni Vice President Tareq al-Hashemi on charges he ran a death squad, accusations Hashemi denies, according to AFP.

Prime Minister Nuri al-Maliki has also called for the sacking of his Sunni deputy Saleh al-Mutlaq, who has denounced the premier as a dictator “worse than Saddam Hussein.”

Meanwhile, the Sunni-backed Iraqiya bloc of Hashemi and Mutlaq has boycotted cabinet and parliament.

Biden, President Barack Obama’s point man on Iraq, has made a flurry of calls to Iraqi leaders this week, urging them to mend fences after Maliki accused Hashemi of running a death squad staffed by bodyguards.

In calls to Maliki on Sunday and to Kurdish leader Massud Barzani on Saturday, Biden “exchanged views… on the current political climate in Iraq and reiterated our support for ongoing efforts to convene a dialogue among Iraqi political leaders,” the White House said in a statement, according to AFP.

Biden also offered condolences after a spate of attacks in Baghdad on Thursday that killed scores of people.

The strikes and the growing political row have heightened sectarian tensions just a week after the last U.S. soldiers of a force that once numbered 170,000 left Iraq, drawing the nine-year war to a close.

Hashemi — holed up at an official guesthouse of Iraqi President Jalal Talabani in the country’s autonomous Kurdish region after an arrest warrant was issued against him — has acknowledged that his guards may have carried out attacks but denied any personal involvement.

Asked if he would return to Baghdad to face trial, the 69-year-old Hashemi told AFP: “Of course not,” attributing his refusal to poor security and the alleged politicization of the justice system.

Hashemi’s Iraqiya bloc, part of Maliki’s national unity government, has boycotted parliament and the cabinet in protest at the prime minister’s alleged centralization of power.

The New York Times, citing senior U.S. administration officials, reported that the United States is weighing a far more subdued role in Iraq and has no intention to send U.S. troops back to the country.

But it quoted one administration official as saying the future security and diplomatic relationship with Iraq would be “colored” by how well Maliki holds together a governing coalition that includes Sunnis and Kurds.

The newspaper also noted that U.S. commandos may be able to operate in Iraq on covert CIA missions like the one that killed al-Qaeda leader Osama bin Laden in Pakistan in May.

“As the U.S. military has drawn down to zero in terms of combat troops, the U.S. intelligence community has not done the same,” it quoted a senior administration official as saying.

“There are serious counterterrorism issues that confront Iraq… And we don’t want to let go of the very solid relationships we have built over the years to share information of importance to both countries.”