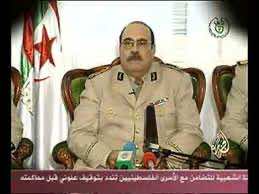 Tartag, who is also known as General Bachir, is in his 60s and has previously run the country’s internal security service, the DSI, on an interim basis after the death of its chief in 2007.

The paper said the general had been named to “eradicate the last groups of Al-Qaeda in the Islamic Maghreb still surviving in the north of the country and to prevent any proliferation of terrorism on the borders with Libya, Niger and Mali.