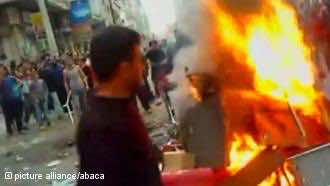 More than a dozen people were said to have been killed in the restive city of Homs on Monday, the same day that Arab League inspectors were due to arrive in Syria for their long-awaited fact-finding mission.

Heavy gunfire in the flashpoint city of Homs killed at least 12 people on Monday as violence escalated between Syrian security forces and anti-government protesters.

“The shells fired from heavy machineguns in the Baba Amro district caused 13 deaths on Monday morning and dozens of injuries. The situation is frightening and the shelling is the most intense of the last three days,” read a statement of the Syrian Observatory for Human Rights, an activist group based in London with contacts in Syria.

The violence came as around 50 Arab League monitors, headed by Sudanese General Mohammed al-Dabi, arrived in Syria to start inspecting areas gripped by violence. A total of 150 Arab monitors are due to arrive in Damascus by the end of the month.

The mission is part of a deal agreed to last week by President Bashar al-Assad’s government with the Arab League, which has stepped up calls for the withdrawal of the Syrian army and militias, the release of detainees and an end to all forms of violence.

Appeal to visit Homs and other hotspots

Before the reports of fresh violence in Homs surfaced Monday, the opposition Syrian National Council (SNC) had appealed for the Arab League observers to visit the hotspot immediately.

“Since early this morning, Baba Amro has been under a tight siege and the threat of military invasion by an estimated 4,000 soldiers,” said a statement from the SNC.

“The Syrian National Council demands that the Arab League observers go to Homs immediately, specifically to the besieged neighborhoods, to fulfill their stated mission,” it added.

Another three people died in the city on Sunday, according to the Syrian Observatory, which said one civilian was shot dead while two died subsequently of their injuries.

The Paris-based leader of the SNC, Burhan Ghalioun, called on the league to involve the United Nations. Some opposition groups have expressed concern that the Arab League is not strong enough to fully implement its “road map” for peace.

“I call upon the Arab League to ask the Security Council to adopt its plan in order to increase possibilities of its success and avoid giving the regime an opportunity not to carry out its obligations,” Ghalioun said in a televised message.

“The barbaric massacre must stop now.”

A Sudanese general who is due to lead the observer mission flew to Damascus on Sunday in advance of other observers. However, the arrival of General Mohammed al-Dabi was not reported by Syrian state television news.

Syria has suffered daily bloodshed for months amid an increasingly violent uprising against President Bashar al-Assad. The United Nations claims the death toll in the country now exceeds 5,000.

On Friday, a twin suicide bomb attack left 44 people dead in Damascus, with the government attributing the attack to al Qaeda and rebels blaming the regime itself.