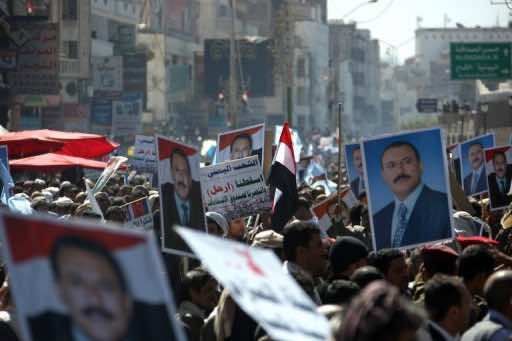 The White House on Monday said that reports that it had already decided to admit Yemen’s President Ali Abdullah Saleh to the United States for medical treatment were “not true.”

But The New York Times, citing two unnamed Obama administration officials, stuck by its story and said that Washington had agreed “in principle” to grant Saleh entry, subject to certain assurances.

Amid confusion over true US intentions, the paper reported that those conditions had not yet been communicated to the US embassy in Sanaa.

As fresh political carnage raged in Yemen at the weekend, Saleh caused a stir by saying he wanted to visit the United States, though was not seeking treatment for wounds sustained in an attack on his palace in June.

But a senior US official revealed that Saleh’s office had contacted the US embassy and said the president did indeed want to go to the United States to seek “specialized medical treatment.”

The request effectively forced Washington, which seeks to promote freedom in the region, to consider whether it would admit an Arab leader blamed for the deaths of hundreds of demonstrators, after a strongman rule lasting 30 years.

Perhaps anticipating criticism of the US stance, the official said Saleh would only be allowed onto US soil for “legitimate” medical treatment.

The Times later Monday quoted a US official as saying that Washington would allow Saleh to travel to a hospital in New York City, after a period of intense internal debate over his request.

But White House deputy spokesman Josh Earnest said in Hawaii where President Barack Obama is taking his Christmas and New Year holiday, that the initial Times report was wrong.

“US officials are continuing to consider President Saleh’s request to enter the country for the sole purpose of seeking medical treatment, but initial reports that permission has already been granted are not true,” Earnest said.

It was unclear when the administration would sign off on a final decision on Saleh’s request, which put US officials in a tight political spot.

Washington wants to ensure that the political transition in Yemen up to elections in February, after which Saleh has said he will stand down, goes smoothly. Some observers believe that is more likely with the president gone.

But if it does admit Saleh, the Obama administration would likely face intense criticism if it is seen as harboring a leader blamed for the deaths of hundreds of people in protests against his rule.

In the most recent explosion of violence, 13 protesters were killed by forces loyal to Saleh in violence that erupted on Saturday.

“Mr Brennan emphasized strongly the need for Yemeni security forces to show maximum restraint when dealing with demonstrations and called upon all sides to refrain from provocative acts that could spur further violence,” Earnest said.

The United States is acutely concerned about further instability in Yemen, and the presence on Yemeni soil of Al-Qaeda and affiliated extremists who have posed a direct threat to America’s people and security.

Two years ago, while Obama was also in Hawaii for Christmas, Nigerian extremists Umar Farouk Abdulmutallab, who was trained in Yemen by Al-Qaeda in the Arabian Peninsula (AQAP), allegedly tried to blow up a US airliner over Detroit with explosives sewn into his underwear.

In September, US-Yemeni militant Anwar al-Awlaqi, who is believed to have masterminded the airliner plot, was killed in what was apparently a US air strike in Yemen.

AQAP has taken advantage of 10 months of deadly protests against Saleh to bolster its presence in the restive provinces of Marib, Shabwa, Abyan.