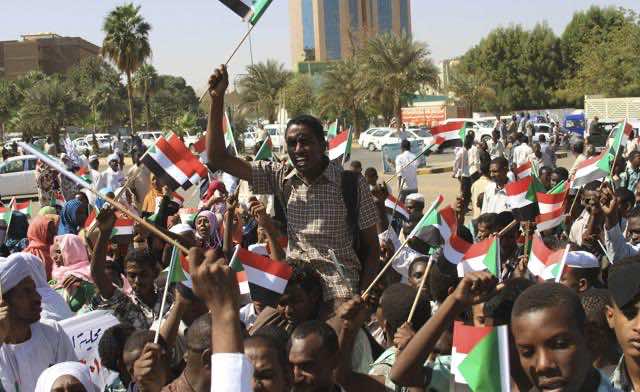 Sudan’s police said that the latest unrest at the University of Khartoum has been politically motivated with the main aim of pushing the country into a political struggle, Al Arabiya reported on Tuesday.

Sudanese police used tear gas, batons and warning shots to disperse a sit-in at the University of Khartoum on Sunday, arresting at least 73, students said.

About 16,000 students started a sit-in at the university in the capital, protesting police violence and demanding the overthrow of the administration and the government.

Sudanese police entered the campus for the first time on Thursday using tear gas and batons to disperse about 700 students protesting in support of people displaced by the Merowe Dam, north of Khartoum. The clashes continued until Saturday, before the students started the sit-in.

Sudan’s President Omar al-Bashir, 67, seized power in a military coup in 1989. He is wanted by the International Criminal Court for genocide and war crimes in the western Sudanese region of Darfur.

According to the United Nations, at least 300,000 people have been killed in Darfur, while the Khartoum government puts the death toll at 10,000.

U.N. officials say 1.9 million people are internally displaced and still living in camps in Darfur, with about 80,000 newly displaced by fighting this year.

Five other people are being sought or are before the International Criminal Court in The Hague for alleged crimes in Darfur.

Meanwhile, anti-Sudan government forces in a “revolutionary front” pledged unity on Monday despite the killing of a top rebel, but an analyst dismissed their goal of toppling the Khartoum regime.

Three rebel factions which had formed an alliance with the Darfur-based Justice and Equality Movement said the death of JEM leader Khalil Ibrahim will not deter them from their mission to overthrow Bashir.

JEM on Sunday night announced the killing of Ibrahim, 54, saying he died in a government air strike on his camp, according to AFP.

The Sudanese army said Ibrahim was wounded on Thursday evening in a clash with government forces in Umm-Gozain, an area of North Kordofan state near North Darfur, and died on Saturday evening.

A JEM spokesman said he was killed early on Friday.

“We are very strong and we think that our alliance will not die,” said Kadia Shimallia of the SPLM-N rebel group in Blue Nile state in Sudan’s southeast.

He vowed they will work together, “to keep on this march towards Khartoum.”

Ibrahim al-Hillu, of the Sudan Liberation Army (SLA) faction headed by Abdul Wahid Nur, said his Darfur group will “stand by our brothers in the Justice and Equality Movement” and abide by all agreements signed with them.

“We are now joined together to fight to the last bullet to remove this government,” said Hussain Minnawi, a leader of the SLA faction led by Minni Minnawi. “We will escalate the fighting later on.”

The rebels say they are in a struggle for “democracy and civil rights” against an Arab-dominated regime unrepresentative of the country’s political, ethnic and religious diversity.

When it confirmed Ibrahim’s death, JEM also vowed to press on with its agenda for national reform.

In July, the government signed the Doha Document for Peace in Darfur with an alliance of rebel splinter factions, but JEM and the two SLA groups did not join the pact.

Instead, last month they and the SPLM-N ratified documents forming the new Sudanese Revolutionary Front dedicated to “popular uprising and armed rebellion” against the National Congress Party government in Khartoum.

On Saturday the official news agency SUNA reported the military was combing the North Kordofan-North Darfur region after JEM “attacked civilians” and targeted local leaders while looting their property in the Umm-Gozain, Goz Abyadh and Aramal areas.

JEM announced on Thursday that its forces had advanced into North Kordofan and were heading eastward towards Khartoum on a mission to topple Bashir’s regime.

Ibrahim’s JEM was the most heavily armed group in the Darfur region, although its recent strength remains unclear.

He was a key player in the early days of the Darfur conflict which erupted in 2003 between non-Arab rebels and the central government.

In October, Ibrahim told AFP he had “returned to my country to fight for the rights of the people in all regions of Sudan,” after seeking refuge in Chad and then Libya.