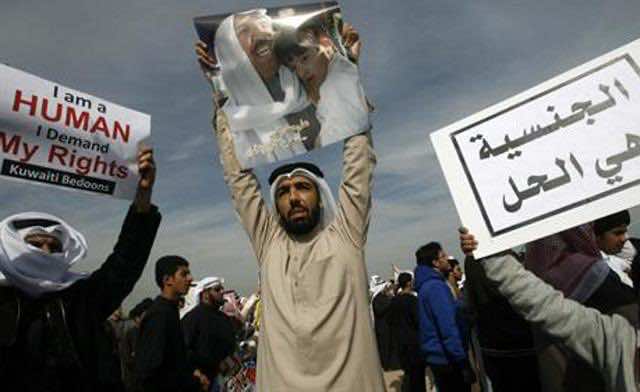 Kuwait’s public prosecutor released 32 stateless people on bail on Tuesday after holding them for nine days for taking part in a protest to demand citizenship, their lawyer said.

“The prosecutor has just ordered their release on bail of $720 each. We are currently undertaking the necessary procedures to free them,” Ali al-Sabri told AFP.

The men were arrested on December 19 during a massive rally by thousands of stateless people to demand Kuwaiti citizenship and other rights. Police used tear gas and water cannons to disperse the crowd.

Sabri said the men were questioned on charges of participating in an illegal assembly and assaulting police.

Fifty-two other stateless people are on trial on similar charges after they took part in protests in February and March.

Interior Minister Sheikh Ahmad al-Humud Al-Sabahsaid in comments published on Tuesday that he had received instructions from “higher authorities” to grant citizenship to stateless individuals who fulfilled certain criteria.

He told the Alam Al-Youm newspaper that legislation would be issued shortly to naturalize stateless people in the army and police force; those who were recorded in the 1965 census or had ancestors who were; relatives of Kuwaitis; and children of Kuwaiti women divorced from foreign husbands.

The minister gave no further details on numbers or any timeline for the proposed action.

Saleh al-Fadhalah, head of the central agency for illegal residents, a government authority dealing with the stateless, said the Gulf state may grant citizenship to 34,000 out of an estimated 105,000 stateless in the country.

The stateless, known locally as bidoons, claim the right to Kuwaiti nationality, saying that their ancestors failed to register for citizenship when the government began registration five decades ago.

Kuwait has long said that most bidoons or their forefathers destroyed their original passports to claim the right to citizenship in order to gain access to the services and generous benefits provided to citizens.

In a bid to force them to produce their original nationality papers,Kuwait has denied them essential documentation, including birth, marriage and death certificates, according to a report in June by Human Rights Watch.